A large double reed instrument, the curtal, was already in use by the middle of the 16th century. In fact, in Spain it was known as the bajon, so the name of the bassoon may have had its origins there. The curtal continued in use, particularly in a continuo role, into the 18th century. By that time, however, the bassoon had already emerged in Germany as a refinement, much as the oboe refined the shawm. 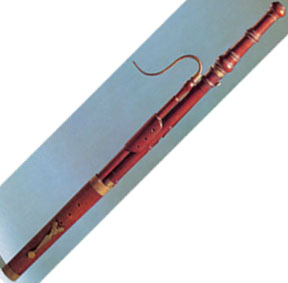 Whereas the curtal was made from a single, double-bored piece of wood, the bassoon was made in jointed sections. It further differed by having a taller “chimney” — that portion of the bell section that extends above the bocal, the metal tube to which the reed is attached. The earliest baroque bassoons show elaborate turnery like other woodwinds but gradually this disappears in favor of a plainer outline. Unlike their modern descendants, early bassoons to the end of the 18th century generally had just four keys, although some six key bassoons survive from before 1800. 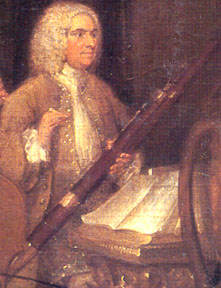 Bassoonist about to place the reed on the bocal. A musical party: the Mathias family (detail) by William Hogarth (1697-1764). Cambridge, Fitzwilliam Museum. 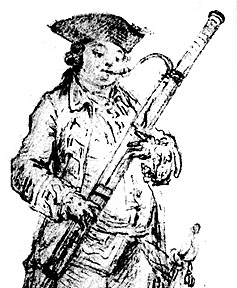