Very few specimens of instruments have survived from the Middle Ages, so most of our information has to come mostly from iconography (the study of depictions in painting and sculpture), from theoretical discussions, and from relating those things to surviving music that seems to be intended for instruments.Unfortunately, not many medieval writers condescend to give much practical information concerning instruments. One of the earliest writers to do so is Johannes de Grocheo who was working, probably in Paris, around the year l300. He divides instruments into two types according to their means of sound production: those that use wind or breath (like trumpets, shawms, flutes and organs), and those that use percussion (like drums, cymbals, bells, and—surprisingly to us perhaps—string instruments).

Later Medieval musicians began to observe a distinction between loud and soft types of instruments (haut and bas is the usual French terminology) and mixed ensembles were made up entirely of instruments of one kind or the other, depending on whether loud or soft music was desired. All of the string instruments, naturally, fall into the soft category and many of the wind instruments do, as well, so it was possible to have combinations of wind and string instruments. In particular, at least one medieval writer mentions the joining of the flute and the fiddle. 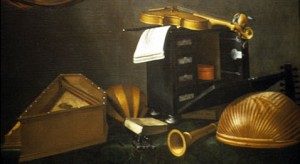 This is a survey of Renaissance instruments using the writings of the musical encyclopedist Michael Praetorius as a point of departure, in an attempt to gain a little more perspective on the rich palette of colors available to the Renaissance instrumentalist. Praetorius published his book about instruments in l6l8 in Wolfenbüttel, in northern Germany, as the second volume of a three-volume encyclopedia entitled Syntagma Musicum. And while this might seem late for a work about Renaissance instruments — most experts consider the Baroque era to begin around l600 — the instruments Praetorius describes are the same ones which were in use throughout much of the l6th century. We begin with his general definition of instruments:Musical Instruments may be described as the ingenious work of able and earnest artisans who devised them after much diligent thought and work, fashioned them out of good materials and designed them in the true proportions of art, such that they produce a beautiful accord of sound and can be employed for the magnification of God and the fitting and proper entertainment of men.

Praetorius makes it clear that single-line instruments—those which play only one note at a time—were normally played in consorts, or groups of instruments of the same type in a wide range of sizes. This represents a change in taste from the late Medieval period when ensembles of different types of instruments seem to have been preferred. The change is no doubt because of the contrapuntal nature of much Renaissance music in which each part is of equal importance and therefore most properly rendered as part of a homogeneous texture. Early in the Renaissance, the standard ensemble had a three-voice texture, increasing to five or six by the end of the 16th century. The Renaissance also saw the beginnings of a substantial and virtuosic solo repertoire for keyboards instruments, lutes, and so on. 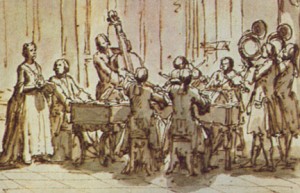 Many instruments of the Baroque era are easily recognizable as antecedents of modern instruments. Sometimes, the differences between them are subtle or even invisible to the casual observer, or simply in the way they are played. Other instruments had their heyday at the time and passed out of use without obvious descendants. It is important to realize that, although these instruments may be simpler in construction than any modern successors, they are not musically inferior. In fact, both musically and technically, they are perfectly suited to performing the repertoire for which they were designed.The survey begins with bowed string instruments, then proceeds to woodwinds, brass, percussion, keyboards, plucked string instruments, and finally, the castrato voice. While the human voice has presumably not changed too much since 1600 (except perhaps for the use of higher sub-laryngeal pressure and more vibrato), the castrato tradition has passed into history, and so it is treated here like other period instruments.