The physical changes to the cello paralleled those of the violin. Gut strings and lower tension help give the baroque cello a sweet, resonant tone. It’s interesting that many baroque cellos were much larger when they were built. The name cello, in fact, comes from the fact that, in the early 17th century, the instrument was built as a large member of the violin family and dubbed violone, which means “big violin.” In France, this instrument was known as the basse de violon (bass violin). It was generally tuned a tone lower than the modern cello, down to Bb instead of C. 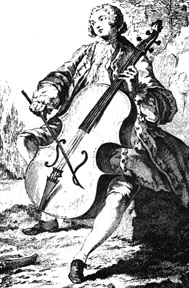 As the bass violin was called upon to play more demanding music towards the end of the 17th century, it was found to be too unwieldy and so was reduced in size slightly and renamed the violoncello — the “small big violin.” From that time, it began to develop a solo repertoire of its own and fine instruments in the larger size were cut down to the new standard. 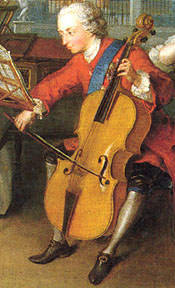 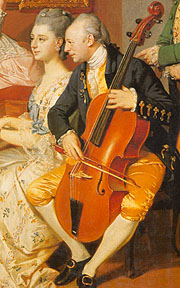 One major playing difference between the baroque and modern cello is that the baroque cello is held between the player_s legs, after the manner of the viola da gamba. This can have a slight dampening effect on the resonance, but there is a trade-off of greater control as the player cradles the instrument closer to the body.