The clavichord continued in use in the baroque era, perhaps most often as a practice instrument for organists who didn_t have constant access to their main instrument. It was soft and portable, so it was a very convenient keyboard for that purpose. Like the Renaissance clavichord, it produced its sound by means of metal tangents striking the string. Since the tangents are attached to the keys themselves, players are able to control the dynamics to a certain degree, mostly from p to pppp! 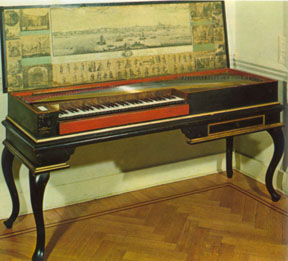 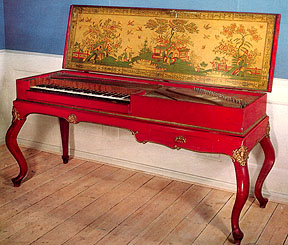 Although the baroque era saw larger instruments being made, the case is still comparatively small. One advantage of the larger case, however, was that the instument could be “unfretted,” which is to say that, unlike earlier fretted clavichords where three or four notes shared a string (stiking them at different points), the new unfretted instruments had a separate string for each note.

Tangents in an unfretted clavichord.

Tangents in a fretted clavichord.

The potential for vibrato became an increasingly important expressive feature and in Germany was referred to by the term, “Bebung.” J.S. Bach’s second son, Carl Philip Emmanuel Bach, was a highly regarded performer and composer for the clavichord. It should be noted, however, that the older Bach’s “Well-tempered Clavier” was not written specifically for clavichord: “Clavier” simply meant “keyboard.”