The baroque flute (traverso, traversière) in D emerged toward the end of the 17th century, apparently the invention of the Hotteterre family of woodwind players/makers in Paris. It differs from the Renaissance flute in having a long, narrowing taper from the head joint to the foot and that helps to bring some of the harmonics better into tune. Unlike the typical Renaissance flute, it was also made in sections. Initially, the Hotteterres made their instruments in three sections: a head joint containing the mouth hole, a middle section containing most of the fingerholes, and a foot joint with the key for the last hole which, unlike most keys on woodwind instruments, actually raised the bottom note of the instrument by a semitone. 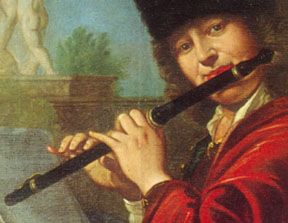 After the initial flurry of interest in France, German makers began to produce instruments as well and the flute became so popular there that in England it was known as the German flute as opposed to the flute or common flute (recorder). These 18th-century instruments were typically made in four sections rather than three, with the middle fingerhole section being divided in two. The baroque flute possesses an extremely supple and flexible sound. It is capable of great nuances of dynamics and flips easily from one register to another, a characteristic that makes much baroque flute music easier on the original than on the modern flute. 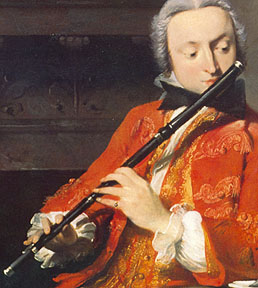 Some 18th-century flutes survive with what are called _corps de rechange_ _ alternative fingerhole joints to enable transposition or the use of different pitch standards. Signs of wear on these suggest a focus on certain pitches, however, and the instruments tend to work best at one or two pitches anyway. One member of the Hotteterre family (le Romain) wrote a popular treatise on flute playing and in the mid-18th century, Johann Joachim Quantz, a German virtuoso flute player, wrote an extensive treatise on the instrument. Like Hotteterre, he also designed instruments and one of his main inventions was the addition of a second key, not as one might think for expanding the range, but rather for enabling nuances of temperament in allowing a D# as well as an Eb above the bottom note. 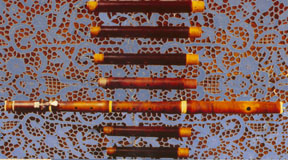 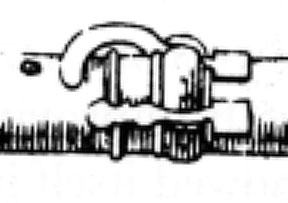 Quantz’s double keywork (detail) from article by Castillon (1777) in the Supplement to the Diderot’s Encyclopédie, vol. 3.