From a profusion of harpsichord shapes in the late Renaissance, the roughly piano-shaped, or “wing-shaped” style won out in the baroque era. Still, there were a number of differences in national styles of harpsichords, and differences in construction create differences in sound. One important line of harpsichords began in Flanders in the late Renaissance in the workshops of the Ruckers family. This Flemish tradition produced fairly large instruments with a robust tone. After some generations, this style was taken over by French builders, some of whom, like Pascal Taskin, frequently rebuilt earlier Flemish harpsichords and added new ranks of jacks or even new keyboards (if the original had a single manual or a limited range). 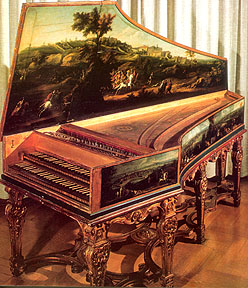 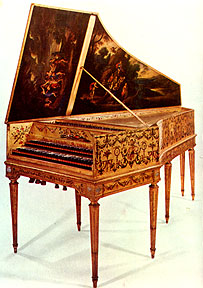 Flemish and French harpsichords are distinguished by a single bent side, which is to say that the long side near the audience has one curve in it, the tip being angled. French cases are often more lightly constructed than the Flemish and the soundboards are less likely to have a carved soundhole. Both types are ideal for solo music, typically with two 8′ ranks and a 4′ (an octave higher than the written pitch of the 8′) rank as well as a variety of plucking points and even plectrum materials, a brilliant treble, and a solid bass.

English harpsichords come out of this tradition as well, with one visual difference that English instruments are generally of varnished wood rather than painted. 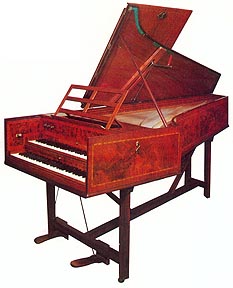