The hurdy-gurdy dates back to the 10th century when it was a large, two-person instrument known as the organistrum. Later in the middle ages it developed a smaller, typically rectangular form known as the symphonia. One of its greatest periods of popularity, however, occurred in the baroque era, especially in France, where, as the vielle … roue (the vielle with the wheel) or simply the vielle, it achieved a vogue as both a solo and ensemble instrument. The hurdy-gurdy’s sound was produced when a rosined wooden wheel, turned by a crank, set a number of strings in continuous droning vibration; in the baroque era, two of these were also a melody strings which could play tunes by being stopped by keys along their length. 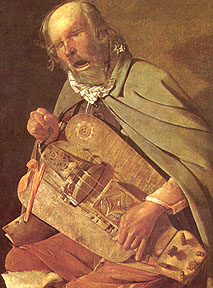 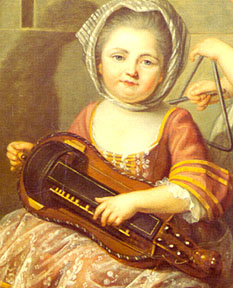 There appear to have two two types of hurdy-gurdy at the time: a larger, louder, lute-shaped instrument (vielle en luth), and a smaller, softer, more rectangular instrument (vielle en guitarre). Besides the simultaneous use of up to three drone strings, another distinctive feature of the hurdy-gurdy was a moveable bridge which could be made to buzz against the top of the instrument by changing the speed of the crank. The created a percussive effect analogous to the finger ornaments of the bagpipe. 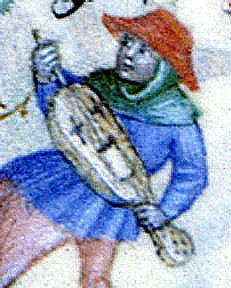 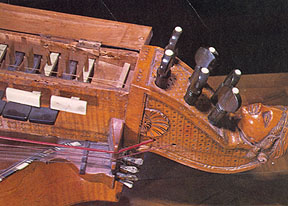