The lute did not change a great deal from the Renaissance to the baroque. In fact, some of the best Renaissance instruments were modified to better fit the musical requirements of baroque music. These included a greater number of strings. At the end of the Renaissance, 10 course lutes were common although even a virtuoso like Dowland seems have used only 7 courses (a course is a pair of strings). Baroque lute-makers expanded the number of courses to 11 and even 13 or 14 by the 18th century. Baroque lutes were also tuned differently from Renaissance lutes, using a more harmonically based “D minor tuning” instead of the more “guitar-like” tuning that continued to be used for the viol in the baroque era. 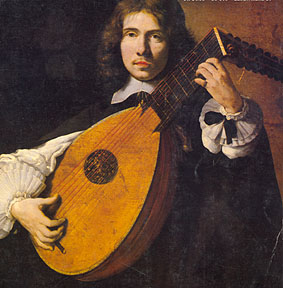 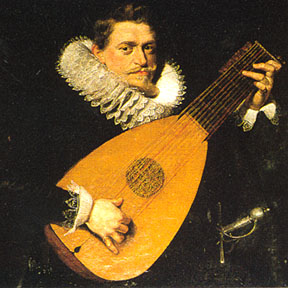 Because the lower strings were harder to stop with the left hand, the lower courses were frequently tuned diatonically rather than in 4ths (and a 3rd) as were the higher strings. Even by the end of the Renaissance, lutenists had noticed that the shorter string lengths were less satisfactory for the sound of the bass strings, so they began to extend the neck of some of the instruments which were referred to as theorbos or chitarrones. Since the low strings were tuned diatonically anyway and didn’t need to be stopped, the strings ran off the bass side of the fingerboard. The theorbo was a much favored instrument for accompanying solo voices in the early baroque era. Its tuning was more like the Renaissance lute for the strings over the fingerboard, although the string length was so long that the top two strings had to be tuned an octave lower. 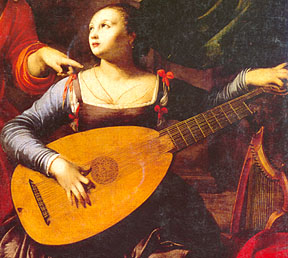 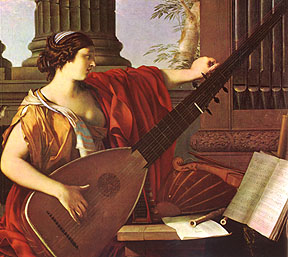 After the introduction of metal-wound strings in the later 17th century, the really long string length became less necessary to the quality of the bass sound. Even 18th-century lutes that were not really long-necked (like theorbos 6 1/2 ft. long!), however, sometimes show a variety of extensions on the bass side of the pegbox in order to lengthen the instruments somewhat. This is the sort of instrument probably played by Sylvius Leopold Weiss, the lute world_s equivalent to J.S. Bach as a virtuoso player and composer.