The baroque oboe seems to have developed from the shawm starting around the 1650s in Paris. Earlier instruments were loud double reeds intended for use outdoors (a use that continued through the 17th century in the “waits” bands of England) , and while the new, more refined oboe (and its larger cousins) maintained that function in the oboe bands of France, it also began to find a place in the orchestra starting in the 1670s. Its early orchestral use was in doubling the first violin part, but gradually it began to be used independently for its own color and expressive capability. The baroque oboe’s sound is less compact and more plaintive than that of the modern oboe and has been described as more like the human voice than any other instrument.

Baroque oboes often have three keys as a kind of hold-over from the swallow-tail key of Renaissance shawms. There, the fork of the key allowed the instrument to be played with either the left or right hand down and, in the three key oboe, that functionality was maintained by providing duplicate keys on either side of the instrument. As technique became standardized with the right hand in the lower position, makers gradually stopped putting in the extra effort of providing a key that was never used. Baroque oboes also typically have double holes for the third and fourth fingerholes. This facilitates the playing of accidentals that would otherwise require forked fingerings, producing a more muffled tone. 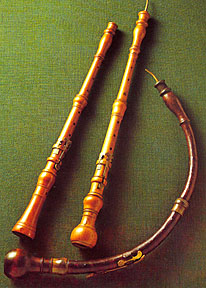 The same larger sizes of baroque oboe that participated in the oboe band, dubbed with Italian names, also acquired a solo repertoire which is known mostly from the music of J.S. Bach. The alto oboe, or oboe d_amore, was pitched a minor 3rd below the regular oboe, and the tenor oboe, or oboe da caccia, was pitched a 5th below. The latter takes its name from the curved profile of the instrument and the fact that some of them were even made with large brass bells supposedly in imitation of hunting horns. A bass or baritone oboe an octave below the standard instrument also saw limited use although its function was taken over by the bassoon in most circumstances. From successful reconstructions and depictions like the ones shown here, we can tell that baroque oboe reeds were wider and flatter than modern oboe reeds. 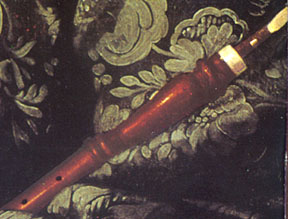