The trombone, or sackbut as it is sometimes called today to distinguish it from its modern counterpart, has changed very little from baroque times to today. Perhaps the most obvious difference is an increase in the flare of the bell, creating a louder, brighter tone on today’s instruments. Like the cornetto, the trombone possesses an Italian chamber repertoire from the early baroque era. 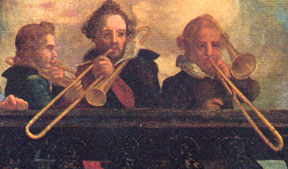 Trombones continued to be used in town bands through the 17th century but, additionally, found frequent use in concerted sacred music. In German-speaking lands, this may have been especially because Martin Luther translated “Gabriel’s trumpet” in the Bible as “Gabriel’s trombone” (Posaune). Even today, some German towns possess “church trombones” that strongly resemble baroque instruments in their smaller bells and softer, more “blendable” tone.

Trombones were versatile instruments that, unlike many others of the time, could be played without difficulty in any key, in any temperament, and in any transposition.