The viola da gamba (viol or viole) began the baroque era as a consort instrument and maintained that role, especially in England, for several decades. In Italy, after the flowering of the viola bastarda (a small bass viol) from the late Renaissance, it was completely supplanted by the violin family. England saw the standardization of the consort sizes as treble in D, Tenor a 5th lower in G and bass a 4th below that in D. The bass size, however, emerged as the viol with the greatest use outside of the consort, seeing duty as a popular continuo instrument and even a solo instrument in its own right.

The viol differs from the cello in having six strings instead of four, and tuned more like a lute or guitar. This facilitates the playing of chords. The instrument also has frets on the fingerboard to help in that regard. In addition, the bow is held underhanded, with the strong bow stroke being the inward stroke, as opposed to the downbow of the violin family. Many violins have “C” holes rather than “f” holes, although there was no standard for that. The sound of the viol tends to be softer and brighter than that of the cello. 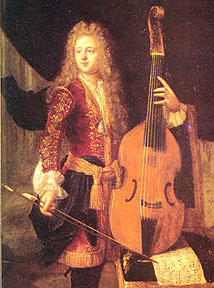 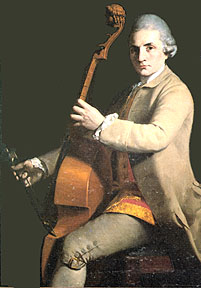 The solo music for the viol includes division and lyra-style (chordal) works from England, dance suites by French composers like St. Colombe, Forqueray, and Marais, and German works by Buxtehude, Telemann, Bach, Schenk, and Abel. St. Colombe is credited with adding a 7th string to the bass end of the viol, taking it down below the cello to A, and expanding its range to an astonishing compass of well over three octaves. 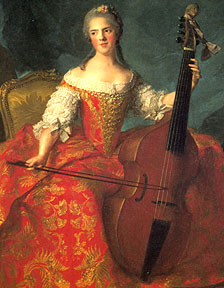