The violin had attained its present shape essentially by the middle of the 16th century, so instruments from the baroque era look at first glance almost identical to modern violins. In fact, most of the most highly prized modern violins were built during the baroque era by makers like Amati, Stradivari, and Guarneri. When those makers originally built their instruments, however, they made the necks shorter and protruding straighter from the end of the body. They also made a much smaller bass bar — a strip of wood glued underneath the top of the box. The modifications to create the present design were mostly made in the early 19th century. 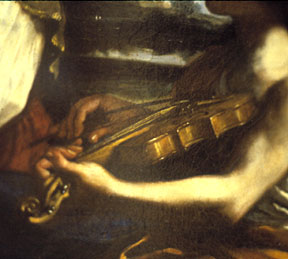 Violin played by an Angel with the thumb on the bow hair. Rest on the Flight into Egypt (detail) by Giovanni Francesco Barbieri (1591-1666) called Il Guercino. Cleveland Museum of Art 1967.123.

The physical differences between modern and baroque violins mean that the baroque violin is softer. The fact that the neck is angled back on the modern instrument means that the tension of the strings can be much higher without breaking the neck. The use of steel strings instead of gut and a larger bass bar also help to make the modern instrument louder. However, the baroque instrument is actually more resonant simply because the box is under less tension and vibrates longer after the bow ceases to move. This helps to explain why chordal passages, as in many works by Heinrich Biber and the unaccompanied Sonatas and Partitas of Bach, work so well on baroque violin. 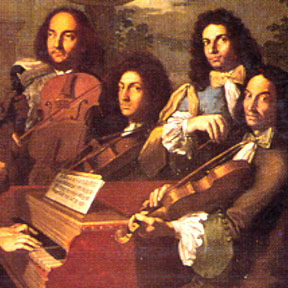 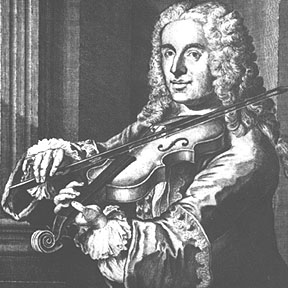 One major aspect of string playing that changed somewhat through the baroque era involves the bow. Early baroque bows are quite short and tend to be shown with the thumb of the player on the bow hair. This manner of holding the bow (along with the use of shorter bows best suited for dance music) lasted well into the 18th century in France but fell out of use much earlier in Italy. A longer bow but still with a softer attack and basic diminuendo profile (both visual and musical) appeared in the late 17th century. This is what is generally known as a “baroque bow” today. Transitional bows with a kind of “battle-ax” head appeared in the second half of the 18th century and the Tourte bow achieved its current form ca.1785. One major difference in bow technique from modern to baroque is that baroque players allowed more of the bow’s own weight to rest on the string, thus allowing the bow_s natural proclivities to shape the sound — a soft attack, a swell, and a diminuendo. A smaller type of fiddle known as a “kit” or “pochette” was also used during the baroque era and is particularly associated with dancing masters who could keep it handy on the dance floor. 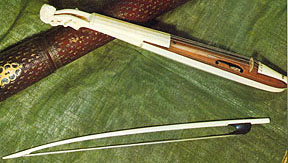