The transverse flute dates back to ancient Rome (from which one bone specimen has survived), but it drops out of use in Europe until the llth or l2th century. Thereafter it enjoyed considerable popularity except, oddly, in the 15th century when it inexplicably disappears from paintings, only to re-emerge once and for all in the 16th century. 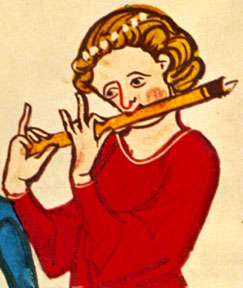 The medieval flute is simply a cylindrical tube stopped at one end, with a mouth-hole and six fingerholes. At its reappearance in the Middle Ages it seems to have been especially popular in Germany.