The harp is an ancient instrument dating back to the Sumerian civilization. In the Middle Ages, it seems to have been strung with gut, except in Ireland where metal strings — probably brass — were used from an early date. The number of strings varied a lot, with a tendency towards increased numbers as the centuries wore on. By the l4th century there were sometimes as many as twenty-five. 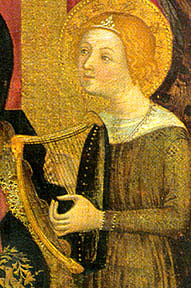 Around l400 the harp acquired a more slender shape which we term “gothic,” and also a series of little elbow-shaped pegs called “bray pins” which touched the strings as they emerged from the sound-box, causing a nasal buzzing sound as the strings were plucked. This was helpful in projecting the sound, since the sound-box of the gothic harp was small (in comparison to later harps) and made of hardwood, and thus did not have the natural resonance of larger spruce-bellied instruments. It also made for a very different aesthetic from the modern harp.