Flutes and recorders were said by one medieval writer to “arouse or exasperate amorous spirits, and to an extent move them to the sweetness of [religious] devotion.” Organs were seen as consisting of a “variety and multitude of flutes” and, therefore, most appropriate for church use. In fact, the organ was virtually the only medieval instrument that seems to have been officially allowed in churches except, perhaps, on procession days. The idea of an organ comprising a number of flutes may also help to explain why the term organ usually appears in the plural even when describing a single instrument. 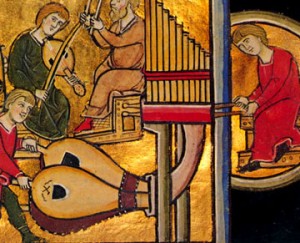 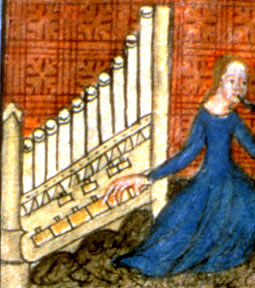 The organ has its origins in antiquity as the hydraulis or water-organ. Until about the l2th century, the key action resembled more the stops on a modern tracker organ, where the player had to pull out the key then replace it to stop the note. By the l4th century the arrangement of keys was basically as it is today although the keys were generally quite shallow. Organs came in a wide array of sizes — from large cathedral models, to small, lap-held instruments called portative organs, where the player pumped the bellows with the left hand and played the button-like keys with the right. 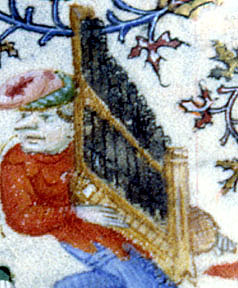 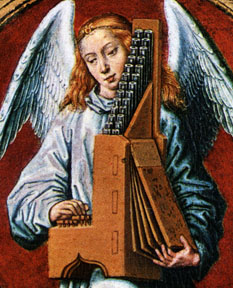 Larger chamber organs were called positive organs because they were “deposited” in one place to be played. The earliest surviving music which seems to have been written for such an instrument is from the l4th century English Robertsbridge Codex. Medieval organs would have differed from later examples also in the use of Pythagorean tuning: the prevailing medieval tuning system where 5ths were acoustically pure. 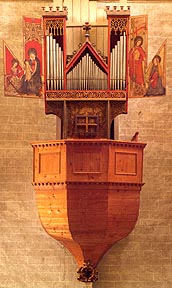 Gothic church organ. Originally built ca. 1390 with decorations added in the 1430s and later pipe additions (the large wooden pipes in the back are baroque). Sion, Switzerland, Cathedral of Notre Dame de Valère.