Percussion instruments are, of course, very ancient. Bells or cymbala are seen frequently in paintings and seemed to have been used especially for teaching purposes. 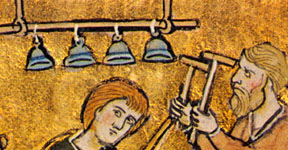 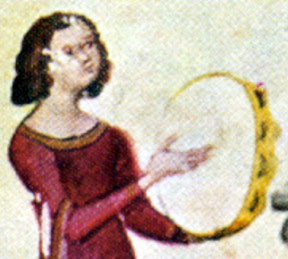 Other percussion instruments include: the nakers, a pair of small kettledrums deriving from the arabic naqqara, imported to Europe during the Crusades; and the tambourine, another more familiar Crusader import, which in medieval England was known as the timbrel. The l4th century writer Konrad of Megenberg had this to say about the sound and effect of all the loud instruments: 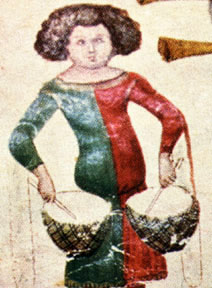 The trumpet and the shawm excite pleasure of the mind in one who is an ally but depress the spirits of enemies with sadness. The drum, with its harshness and the insulting sound of its growling excites the energy and courage of the spirit to a certain agility and inflames an irascible, powerful vigour. Wherefore these three concordant instruments (shawm, trumpet and drum) are most fit to be set and often employed in the first attack of battle to terrify the enemy and encourage allies.