The rebec is a bowed instrument that originated around the l0th century, apparently deriving from the Arabic rebab and the Eastern European lira. It was probably smaller than the vielle as a rule since one medieval writer compares its sound to a woman’s voice. It was pear-shaped like the lute, but usually more slender, having only three strings, and its sound (if modern reproductions are to be believed) has a distinctive nasal quality. 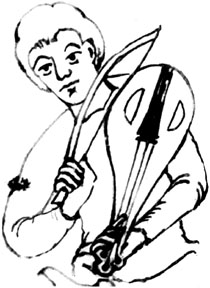 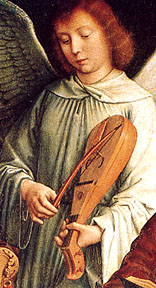 Unlike the vielle, the rebec was probably tuned in fifths like the later violin family. In that regard, it’s interesting that German theorists sometimes referred to it as the “Geige,” a term that was eventually used for the violin. 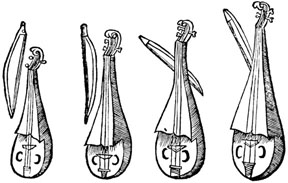 The rebec survived into the early Renaissance when it was subjected to the “family” treatment — the creation of different sizes. By that time, its use was on the wane, however, and the larger sizes were never as popular as the standard treble rebec.