For all his lack of enthusiasm for the violin, Praetorius does allow that along with a lute, bass viol, flute, and the cittern and bandora—in other words, a Broken Consort or English Consort—it “makes an especially beautiful effect and gives forth an appealing and lovely resonance.” Praetorius had probably heard such a consort with the English theatrical comedy troupes that toured Germany in the late 16th and early 17th centuries. 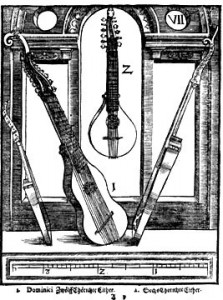 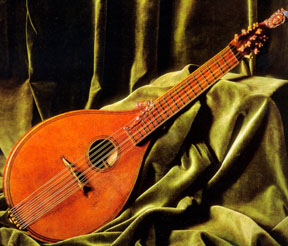 The cittern was a smallish plucked string instrument that seems to have been a sort of Renaissance banjo-equivalent. It was wire strung and, unlike the lute and viol, had frets glued onto the fingerboard. Its shape was unique too in tapering towards the lower end of the body. The bandora (also pandora, orpharion) typically had scalloped sides with a flat back and, like the cittern, used wire rather than gut strings. It was reportedly invented in England in 1562. While both instruments had a small solo repertoire, they seem to have functioned often as proto-continuo instruments, providing harmony and rhythm in ensemble situations. 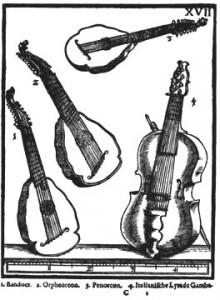 Increasingly, after 1550, the lute was used in combination with other instruments and this “Broken Consort” (i.e., as opposed to a “closed consort” of similar instruments) was a specialized ensemble that developed towards the end of the Renaissance with its own idiomatic repertoire. While much Renaissance music was ‘apt for voices or instruments’ or playable by ‘all sorts of instruments’, this new ensemble repertoire shows an emerging concern for “orchestration” — that is, composing or arranging for the special qualities of the individual instruments — something that was to be more fully exploited in the Baroque era. 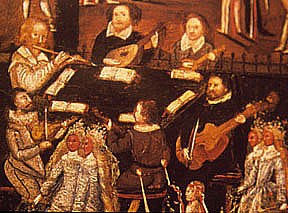