The clavichord was a widely used keyboard instrument in the Renaissance. Praetorius recommends it for beginning keyboard players, in fact, because it was so easy to keep in tune, and because it did not have the harpsichord’s problem of breaking quills. 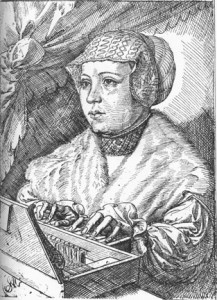 Clavichords of the Renaissance were of the so-called “fretted” type, which is to say that each string could produce three or four different pitches by being struck in different places by metal tangents connected to the three or four corresponding keys. This meant that the number of strings necessary was kept to a minimum, but also that certain pitches could not be sounded simultaneously since they used the same string, and this resulted in a characteristic, rather detached articulation.

The real advantage to the clavichord was an expressive one: it was the only keyboard instrument in common use which could produce gradations of loud & soft and even vibrato through the touch of the player’s finger.