Crumhorns or Krummhorns are instruments which are similar to recorders in their fingering system, but are otherwise quite different. The name refers to the characteristic letter “J” shape of the instrument and derives from an old German word meaning “curved” — same root as our English word “crumpled.” Krummhorns use a double reed, like the modern oboe or bassoon, but unlike those instruments, the reed is not held between the lips, but rather encased in a wooden capsule at the top of the instrument (a feature that first appears in paintings around the year 1490). As Praetorius points out, the Krummhorn thus works more in the manner of the bagpipe by using the wind pressure in the chamber around the reed to start it vibrating. 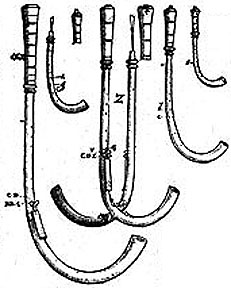 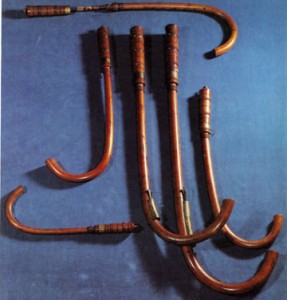 The fact that the reed is not controlled directly means that the instrument has only a limited range — barely over an octave in fact. Also, because the bore is cylindrical, the sound is softer than it would be with a conical bore. 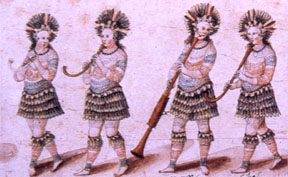 Krummhorns seem to have been more popular in Germany, France, and England than elsewhere. There is even one South German mural where the artist shows musicians dressed as natives from the new world playing them, perhaps as a way of representing “strange and exotic” instruments which the artist had actually never seen. Krummhorns are devilishly difficult to play well and an abundance of bad performances has made it the butt of many jokes. But there is nothing quite so stirring as a vigorous consort of Krummhorns.