Plucked-string keyboard instruments of the Renaissance included the harpsichord, the virginals, and the spinet. The earliest description of a harpsichord-like instrument actually occurs in a treatise written about 1440 by Henri Arnaut de Zwolle, but the earliest surviving instruments are from the beginning of the 16th century. By the end of the Renaissance, they were so popular that Praetorius speaks out against them being referred to simply by the term “instruments” and not by their proper names. Today we usually reserve the term harpsichord for the one shaped somewhat like a grand piano. Many Italian instruments have this basic shape, though typically more slender and angular. They are also much, much lighter in construction than pianos (lighter even than other harpsichords), and were very often placed in separate outer cases for protection and to allow decoration. 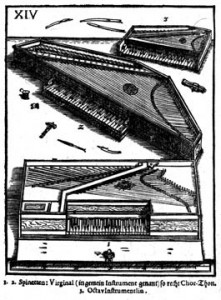 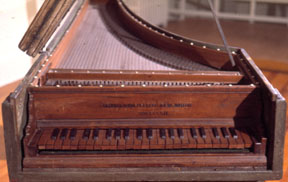 Other common shapes included the pentagonal or hexagonal spinet, and the rectangular virginals. Each of these instruments has a slightly different sound because of the size and shape of the box, and because the strings are plucked at different places along their length: the closer to the middle of the string, the more rotund the sound. Some virginals, called muselars, place the keyboard towards the right end of the instrument, moving the plucking action as far as possible to the middle of the strings and producing a very “plummy” tone. 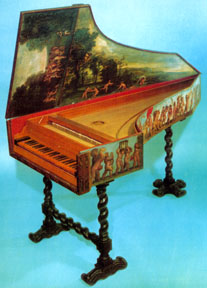 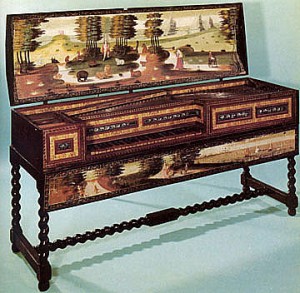 The plectra were typically little pieces of crow quill, although nowadays, players tend to use delrin—a type of plastic—as a substitute. Renaissance harpsichords differed from Baroque instruments in having fewer manuals (keyboards) and fewer ranks of strings at different pitches. The spinets and virginals, in fact, mostly had just a single rank while Italian instruments often had a pair of 8_ strings (sounding at written pitch), or perhaps, one 8′ and one 4′ rank (sounding an octave above written pitch). Many surviving instruments were modified after the Renaissance so it is sometimes difficult to gauge the original disposition.