The best known consort instruments of the Renaissance are the recorders. They differ from the transverse flutes by being blown at one end, having a whistle-like mechanism to produce the sound. Praetorius lists eight common sizes of recorder, ranging from what we would call “sopranino” down to a contrabass about seven feet long. 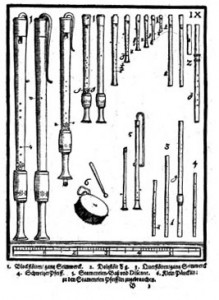 Praetorius’s complete range of recorders would not all have been played together, however; a large (or 8′) consort would typically have used a tenor in C (about two feet long) on the top line down to a great bass in F (about six feet long) on the bass, while a small (or 4′) consort would have used a soprano in C or D (about a foot long) or an alto in G (about sixteen inches long) on top down to a bass or basset in F (about three feet long). The two groups would thus have sounded an octave apart.

Renaissance recorders do not have as large a range and are not so clear-toned as Baroque recorders, but they blend extremely well together. The instruments also show less decoration than Baroque recorders, using a simple, symmetrical shape. Like the shawms, larger recorders feature a fontanelle — a “pepper shaker” cover for the key mechanism that served both to protect the key and hide its asymmetry. The key itself is often referred to as a “swallow-tail,” and its shape allowed the instrument to be played with the left or the right hand down, there being no standard method as there is today.