The probable derivation of the word sackbut is from the old French verbs sacquer and bouter, which aptly describe the pulling and pushing arm motion of the player. The Italian name for it from its first appearance in the mid-15th century was always trombone—we just tend to use sackbut today to distinguish it from its modern counterpart. Evolving quickly from the single-slide instrument, the slide trumpet, the sackbut has changed perhaps the least of any instrument in common use today. Its earliest ensemble use seems to have been as a regular member of the shawm band. 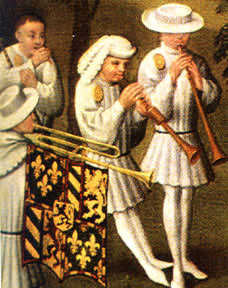 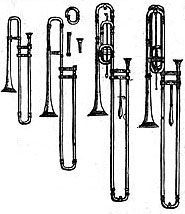 Even though it can hold its own with shawms if the need arises, the sackbut_s sound is naturally a little softer and more mellow than that of the modern trombone, in part because its bell was less flared (the flaring occurred gradually over the following centuries). Sackbuts were made, not just in the tenor size that corresponds to the modern trombone, but frequently also in alto and bass sizes. Bass sackbuts often show a handle, necessary for reaching the farther positions on a very long slide.

Regularly used in ensemble with the cornetto on top, at the other end of their range, sackbuts were sometimes combined with a double reed instrument, the curtal or Dulzian. 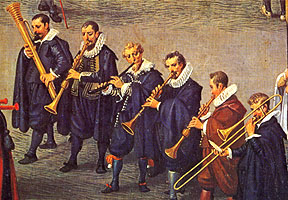