The viol, or viola da gamba, is so called because even the smallest of these instruments is held between the legs rather than at the shoulder. How does the viol family differ from the violin family? In general terms, there are six strings instead of four, the fingerboard is fitted with frets (tied strands of gut), the soundholes are traditionally shaped like the letter “C” instead of “f”—although this depended on where the instrument was made—and the bow is held underhanded, that is, with the palm facing upwards. 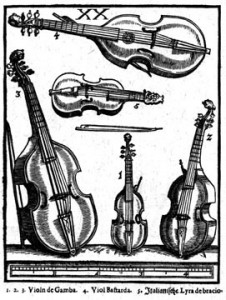 Surviving Renaissance viols differ from more familiar 17th- and 18th-century instruments especially in their steeply sloping shoulders. They also tend to conform less to our concept of consort sizes, based on the standards of 17th-century instruments. Some surviving specimens are elaborately decorated with carving and inlay work. 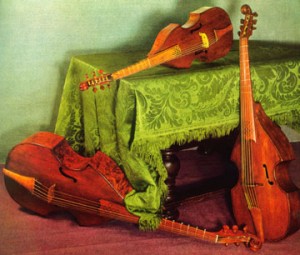 Viols were extremely popular consort instruments in the Renaissance, having developed at the end of the 15th-century, perhaps in Italy, perhaps in Spain. There also developed a virtuosic solo repertoire for viol starting after 1550, especially that for the so-called “viola bastarda.” This oddly-named instrument seems actually to have been a small bass viol, with its smaller size allowing the performance virtuosic passage work from the top to the bottom of the range.