Praetorius holds the violin in less esteem than the viol and considers it primarily a folk instrument. Recent research, however, has shown that the violin, particularly in consort with other violin family members as a violin band, was highly valued at the courts of England and France. Since so much fine violin-building seems to have been centered in Italy even during the Renaissance, the violin must have been important there, too. Andrea Amati, for example began making violins in the middle of the 16th century. We often tend to think of violins as having been developed from the viols but, in fact, they seem to have been separate families that developed concurrently. The violin may have developed from the Lira da braccio, but by the middle of the 16th century, it had achieved basically the exact shape it has today. 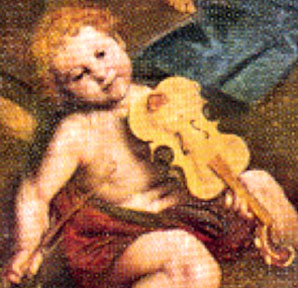 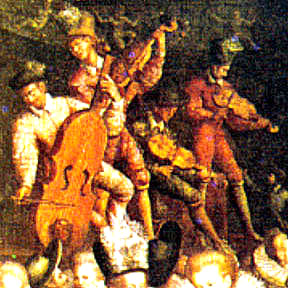 One reason we haven’t heard so much about the violin in the Renaissance is because it was definitely a professional’s instrument, whereas viols and recorders, and so on, enjoyed a large amateur market. Basically, the violin band seems to have specialized in dance music (in contrast to the viols which were favored for more contrapuntal works.) The violin band was typically a five-part ensemble with one or two violins, two or three violas, and a bass violin (a large cello tuned a step lower). It was often joined by a lute or cittern which acted as accompaniment/percussion. 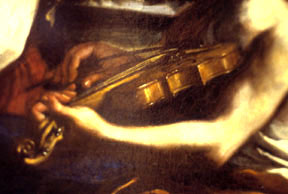 The Renaissance violin has a shorter, stubbier neck and a few other differences from the modern instrument, but it is clearly recognizable in appearance and sound. The bow was probably held with the thumb on the hair as a rule, as it continued to be in France until the 18th century.