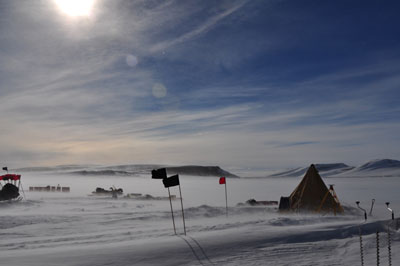 Here’s a hypothetical question for people: “Who wants to spend 35 days living in a 9 foot by 9 foot area with (in many cases) a complete stranger?” Remember, by living, I mean sleeping, eating, cooking, recreating, and not showering or bathing in this area. You would be spending  pretty much all of your time there, unless you’re outside where the weather is ~0 F and up to 30 mph winds. Huh, so that’s more hands than I expected…allow me to further educate you!

Want a better idea of just how “big” 9’ x 9’ is? I suggest you measure it out on the floor of your kitchen or living room. Don’t worry, there’ll be plenty of room. Now, once you have your 9’ by 9’ area, divide it into thirds in one direction. That 3’ x 9’ area is your personal space. Within that area you need to leave enough room for you to sleep, and store all of your personal baggage (and trust me, some of us have more personal baggage than others!). The middle third is community space for cooking, food and general storage, plus standing up to get dressed in the morning. That other third is for your bunk mate.

I suppose a slightly more technical description of our tent space is in order. We live in what are called Scott Tents, named for Robert Falcon Scott, the British explorer who led the expedition that was the second to reach the South Pole (a group of Norwegians under Roald Amundsen was first earlier the same season). While the materials have evolved over the years, the basic design has remain the same, a double walled tent that is a 4 sided equilateral pyramid (in our case 9’ by 9’ at the base, by 9’ tall). The double walls (~6” apart) puts a layer of insulating air between your living space and the harsh environment outside. Remember that the tent walls rise at a 60 degree angle, a mathematical requirement in an equilateral pyramid…and something that would have taken me a lot less time to figure out if Excel was a truly useful program. There is a “clothesline” around the top of the tent to hang stuff you want to thaw or to dry. The tent is vented at the top with two breathing tubes (this will be important later). The last thing of note is that our tents are a pale yellow, which means your world is bathed for 12-16 hours a day in a pale yellow light which totally distorts your sense of color. It also may be the source of our superpowers (I’m still investigating each persons exact superpower), much like the orange sun for Superman. 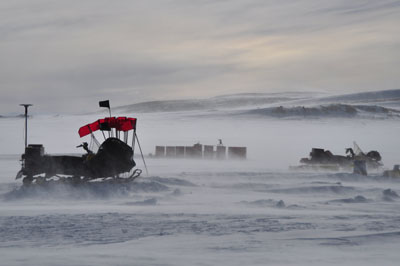 The snow/ice underneath you is a fairly steady -40 degrees F/C (they’re actually the same at this temperature), and between where my butt sits and that -40 degrees is ½ inch of plywood, 1 inch of foam, and a 2” inflatable Thermarest (luckily in my case my butt has plenty of additional padding to keep me safe from the cold). We heat the tent and cook with a dual burner propane stove. That may not sound like much, but within 5 minutes of turning it on in the morning, the tent is very comfortable. There is a interesting thermal gradient in the tent (okay, interesting might be a strong word for it), but the tent goes from about -40 at the bottom, to over 100 degrees at the top in the peak, all of that over about 9 feet. If you’re thinking that using propane stoves in a confined space sounds like a recipe for carbon monoxide poisoning, you’re (a) forgetting our superpowers, and (b) that the tent is vented at the top. Even with the stoves off, the tents rarely get much below 25 degrees F at night with the burners off (and we have sleeping bags rated to -40 to fend off that chill).

If you’re wondering why I am writing all of this today there are, as usual, multiple reasons. First and foremost, the wind is blowing a good 25 mph today, which means the ground is obscured, thus we’re confined to our tents. Second, it’s been a few days since I’ve posted a blog, and my hubris has led me to believe that the internet is buzzing with anticipation over my next words…or at a least a portion of the internet. As we have thus far been confined to our tents for ~50% of this trip (a much higher proportion than the 5% my last trip here), I’ve had plenty of time to cogitate on the origin, usefulness, and recreational potential uses of a Scott Tent (I have tentative plans for a racquetball court in the science/party tent).

What do people do on our off days? Well that’s very much a personal choice, but common time passers are reading, writing, arithmetic (wait, scratch that one), cross-word or Sudoku puzzling, card playing, and now in the modern world we have computers so I can write this blog on my laptop while listening to music and watching a movie in the background (we have a solar panel outside for power…which works great in a place with nearly continuous sunlight). Yes, we’re very much like the early explorers Scott and Shackelton, except we have power, don’t have to eat pemmican and and hoosh everyday,  and we don’t have to man-haul 400 pound sledges up and down crevasses for 10 hours a day (I think those are really some pretty minor differences). 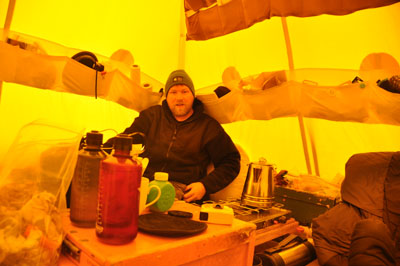 Note: There are more esoteric ways to pass time, which include staring at the walls (a superpower of mine), and see if you can drive your tent mate insane. I am currently involved in that exact pursuit with my tent mate, Jim “Kiwi-bear” Karner, which isn’t as easy as it sounds since Jim is just about the nicest guy I have ever met. Still two hours of the worst euro speed-metal and techno-pop, is starting to wear him down, and pretty soon I’m going to bust out an endless string of crappy movie quotes, culminating with “want to hear the most annoying sound in the world”. I do have to be a little careful since Jim is a hockey player, and I’m pretty sure I’ll lose the ensuing fight!

So what else is going on? Well, we brought in the new year in proper style, with Chips, guacamole, and salsa (thanks to Cecilia and JSC for that), quesadillas by Jim (who is essentially the quesadilla whisperer), pizza, and various beverages including some very nice margaritas. There’s something immensely satisfying about sitting in a tent at ~9000 feet above sea level in one of the most remote places on Earth, and still having “fresh” hot pizza! Also, given our time zone, we were among the very first people on Earth to ring in the new year; now I hate to say that this makes us better than everyone who came after us, but maybe just a little bit.

We had a late start yesterday morning as well (due to snow), and that allowed me to have the first “shower” of the season, and the first change of clothes. Now, this isn’t a shower in the proper sense of the word, as it entailed standing in two small basins in a tent, and pouring nalgenes of water over yourself, using a little soap, and then rinsing off. I used a total of 1 gallon of water, which means I had to chip a 5 gallon bucket of ice and melt it. Getting it to the right temperature is a challenge, as too hot leads to scalding (an embarrassing injury on a continent covered in ice), and too cold leads to shrinkage (never a good thing). Still, after two full weeks, it felts so good to be clean, and to put on clean clothes. 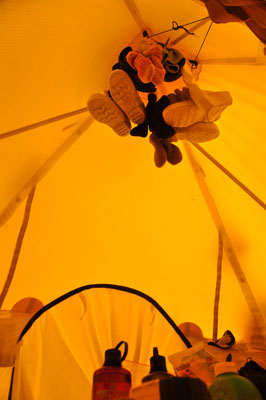 As my tentmate had a shower afterwards, this also led to a first in our tent for the season. We had a whole day without “snow” in the tent. Now, of course we aren’t talking about real snow. If Scott Tents allowed snow to blow in on a regular basis, even the British would have abandoned them after 100 years. I mean, while the Brits are a tenacious lot, you might even call them stubborn, I think even they might give something up after getting snowed on for 100 years (though I can’t be certain of this). No, this would be human snow, also known as dander, which when you come right down to it is just dead skin flakes.

Now, if you went ewwwwwwww, fair enough. But you try living in a place where there is about 8% humidity, cold chaffing winds, and a lack of washing or laundry facilities. Now some of the ladies on our team have pointed out that the dander issue can be mitigated by using wipes. This obviously confused the guys involved in the conversation, especially when the ladies suggested they had as many as 4 different kind of wipes (I am hesitant to think too deeply on what these different wipes are for). I remain personally skeptical that any amount of wipes (and some substance they called “lotion”) can eliminate the indoor snowstorm, but perhaps I have to add dander to the list of things women can not do under any circumstances (along with sweat and pass gas). Still, it was nice to look down at my Thermarest and not see a fine white coating…at least for one day.

Well, I think it’s time to wrap this up, we’re almost up to the most annoying sound in the world portion of the annoyance game, and I’ll need to focus on that. Stay tuned for future installments of other aspects of camp life, like our love-hate relationship (for some of us) with our snowmobiles, cooking and (a lack) of cleaning, and a weather scale for Antarctica.

Image 1: Image of camp looking crosswind, as the snow rips through camp.

Image 2: Closer up image of snow ripping through camp, with Johnny’s snow-mobile for scale.

Image 3: View of the inside of the tent, near ground level. Kiwi-bear for scale. (To be fair I asked if hr wanted a second picture with his mouth closed, but he figured why change for appearances on the internet.)

Image 4: View of top of the tent with our unmentionables hanging to stay warm and dry. A portion of the sphincter-like door on the Scott tent included for scale (We also call this door a Satterwhite door in honor of Bill Satterwhite’s never ending and ultimately futile daily battles with these doors during a previous season.)