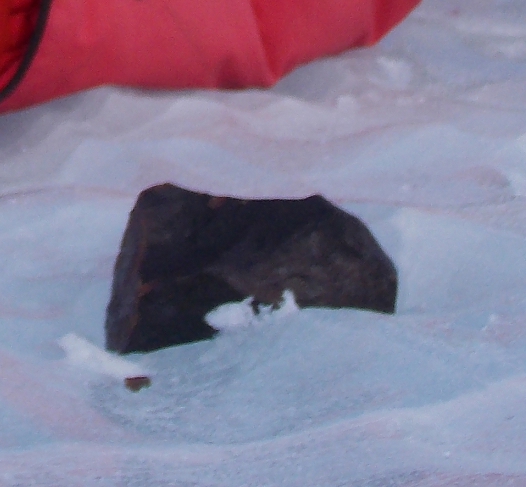 We enjoyed our final day of field work yesterday.  We were actually surprised this was our last day as we had been expecting another day or two of work.  More on this later.  But, we wrapped-up our field work by doing a number of different activities.  Firstly, we did a broad sweep through the more distant blue ice field, where we’d started working when we first got to Davis-Ward, to collect flags we had previously set for our found meteorites.  Of course, we kept our eyes open for any last meteorites to be snagged.  We then proceeded down along the moraine, with the same goals — picking up flags and any meteorites — to the very prolific ‘meteorite beach’ where we’d been working more recently (and where we’d been able to collect 172 meteorites a couple of days ago).

After finishing up collecting the few remaining meteorites we had located previously  in this location (and as always here, spotting a few more meteorites while doing so), we then did a little reconnaissance.  This activity entailed moving around the semi-circular ice tongue and outside it, stopping every few hundred meters to case an area of more meteorites.  They didn’t seem ‘t quite as abundant in these other locations as on ‘meteorite beach’ but there were still some very nice meteorites to be collected.  We left behind some particularly handsome specimens on the ice tongue to send our love and encouragement for a future ANSMET team working at this wonderful location.

Regarding our redeployment to McMurdo, we had been excited by the prospect of transport by Basler directly from Davis-Ward to McMurdo (see previous blogs).  But plans are always fluid here in Antarctica and we’re now back to being scheduled for the 9 Twin Otter flights, with an intermediate camp at CTAM. This redeployment will start on Monday.  To prepare for the redeployment we need a day in camp to get our gear packed and ready.   We will finish grooming the landing strip, as the Twin Otters can still use it to advantage when taking off fully loaded, as they will be when pulling us out of here.  Other activities for today will include inventorying the meteorites, inventorying our remaining food to cache for future ANSMET trips, re-organizing our flags and other cargo, and tearing down what we can pack today before the first plane arrives tomorrow.

Image caption: one of the handsome meteorites we spotted out on the ice tongue near ‘meteorite beach’ just waiting patiently for a future ANSMET cohort to come collect it!