As I write this the last of the 2014-2015 ANSMET field party members (John Schutt) should be heading for the MEC to catch his flight to Christchurch and soon afterwards his home in Washington State.  Thus it seems like a perfect time to try and sum up the season.

Before this field season began,  we (meaning the leadership folks,  myself, John Schutt and Jim Karner) felt we understood what we were getting into, barring any surprise developments. Our target, the Davis-Ward site you’ve been reading about, had been visited four times previously, including two reconnaissance visits (in 1984-85 and 2003-04) and two systematic search visits (in 2008-09 and 2010-11). All of us had spent significant time there previously and so we felt we knew it pretty well. We had a good mix of experienced and new personnel on our team (including Devon Burr, Shannon Walker, Ryan Zeigler, Brian Rougeux, Vinciane DeBaille, Christine Floss and the authors) and our preparations all went smoothly during the pre-season. 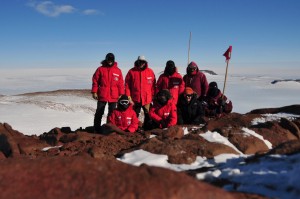 There was one pre-season question for which our answers diverged, however- how long it would take to finish our searches at the Davis-Ward site? Barring delays due to weather or logistics, this would be directly related to how many meteorites we might find during systematic searching and more specifically how many of those meteorites would be found in the moraines and nearby blue ice regions where terrestrial rocks are scattered by the millions, requiring slow and methodical foot searching. Without disclosing who held what opinion, one of us (who I shall call “The Optimist”) estimated it would take no more part of a season to finish up Davis-Ward. Thus our plans included a possible camp move to the nearby Dominion Range icefield late in the season. Another of us (“The Pessimist”) believed it would take this season and maybe one or two more. The third individual (“The Politician”) agreed and disagreed with both depending on who he had last talked to. The origin of this diversity of opinions was prior test-sampling of the moraines. We routinely do test searches during a systematic season; a few field party members will conduct a quick, limited search of a previously unvisited part of the icefield or moraine, and then we use the results to guide our workplan for the future. At Davis-Ward, these tests had produced bimodal results; some visits produced little in hours of searching, while others resulted in finds within the first minute. Our individual opinions on the meteorite potential of the Davis-Ward moraines was utterly dependent on which test you were a part of. That said, we were uniformly eager to see which opinion would hold true, and of one mind in regards to the value of the meteorites themselves.

As you’ve read in the posts before this, the season got underway with only modest delays in mid-December (a very welcome change from last year) and the put-in from McMurdo Station to Davis-Ward (via the old CTAM site) took only a few days. Given the high density of terrestrial rock on and around these icefields we dedicated much of the first week to searching previously visited locales, with veterans aiding newbies and all of us training our eyes to distinguish meteorites from native lithologies. Both foot-searching and icefield traverses were conducted, but by the end of the training period it was clear moraine searches were going to be a big part of the season. Moraine Mania reached a climax in the last week of the season, when the team encountered a region containing one of the densest meteorite concentrations we’ve ever seen, affectionately called “Meteorite Beach”. Individual specimens were often found within a meter or two of each other and during one phenomenal day the team found, surveyed and collected over 170 specimens (a new record). At season’s end the team had recovered a total of 562 specimens; nearly 60% of these came from the moraines and most of the remainder came from ice within a few hundred meters of the moraine. With the 2013-2014 meteorites (that have been in storage in Antarctica for a year) there will be nearly 900 new meteorites arriving at JSC this spring.

At season’s end there is no longer any disagreement about the future workload at Davis-Ward; we’ll be going back there for at least one full season and maybe more than once.  There’s still blue ice to search and lots of moraine to explore. We’ve learned that any region of these icefields, moraine or ice or mountain-top, has the potential to surprise us with significant meteorite concentrations. Unfortunately, so far there’s no way to predict where those concentrations might be, and clearly Davis-Ward is a place we can’t afford to trust our instincts; we simply have to put our boots on the ice and go have a look.  I can’t tell you when we shall return,  simply because I don’t know!   But stay tuned…..   and before you know it we’ll be blogging about the 2015-2016 ANSMET season.