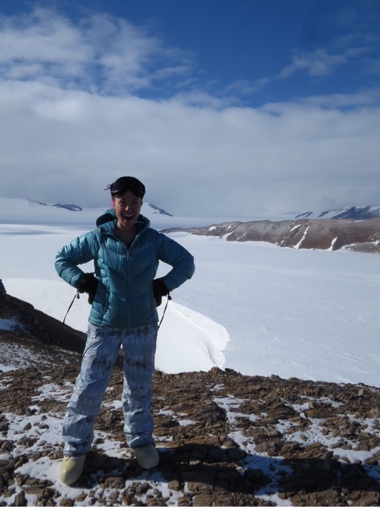 Morgan with many oxygen isotopes in the background.

We started the day off by finding a couple of meteorites in a moraine north of camp, but, alas, our searching was cut short by some large clouds that make it difficult to see the ice surface (critical, depending on who you talk to, for seeing sastrugi and avoiding flipping one’s snowmobile) and distinguish between terrestrial rocks and meteorites. At least the bad weather gives me an opportunity to tell you a little more about why we’re looking for meteorites here in the first place… Meteorites land in an even distribution across the Earth, but certain places are particularly great for meteorite hunting because they’re better preserved and easier to collect there. Local environmental conditions, like temperature and humidity, determine how much physical and chemical weathering the meteorite will undergo after landing on the Earth. The extremely cold environment in Antarctica means meteorites here suffer less weathering than in warmer places. The relative humidity of the Antarctic atmosphere is very low (because it’s so cold), which explains the paradoxical classification of an ice cube as a desert. Although the meteorites we find here have been embedded in ice for many thousands of years, the low temperature and absence of liquid water mitigates the weathering effects of this H2O. This makes Antarctic meteorites particularly valuable for the study of many phases, minerals, elements, etc., but one specific example of this that’s near and dear to my heart is the study of water. In my research as a graduate student at UC San Diego, I studied the distribution of water in the inner solar system by measuring the oxygen isotopic composition of water in meteorites from several asteroids and Mars, as well as in lunar samples from the Apollo missions to better understand where the water in the Earth-Moon system originated. To do this, I analyzed the ratios of oxygen’s three isotopes (containing 8, 9, and 10 neutrons) in water I’d extracted from these samples. All three of these isotopes are stable (meaning they do not radioactively decay), but these oxygen atoms can exchange with surrounding oxygen-bearing reservoirs to change their proportions. This isotope exchange reaction is temperature dependent, and consequently, the oxygen isotopic composition is altered less in cold environments, like Antarctica! Less alteration means the samples are more pristine and their measured compositions are more likely to reflect that of their parent celestial bodies. In this context, Antarctic meteorites offer a great way to study these bodies without the headaches and expense of space travel (oh, the jet lag!). Many of the rarer classes of meteorites (HEDs, SNCs/Martian meteorites, and other achondrites, to name but a few) are stony in composition (as opposed to iron) and so they suffer more weathering and are more difficult to distinguish from terrestrial rocks in other places on Earth. The better preservation and lower concentration of terrestrial rocks in Antarctica mean, despite the even distribution I mentioned, more samples of these rarer classes are recovered here. Until sample return missions to these celestial bodies are accomplished, meteorites are the only physical samples of them we have to study. Additionally, Antarctica is excellent meteorite hunting territory because treaties protect this continent for non-profit, scientific research. The meteorites ANSMET collects here are curated by JSC and the Smithsonian, and anyone can request these samples for scientific analysis. Meteorites found in other parts of the world are property of the land owner or government, depending on the country, and so must be purchased, if that’s even a legal option. Do I need to mention all the funding limitations on carrying out scientific research? Thanks, I didn’t think so. Hopefully, this explains why we’re happily freezing our tails off in the name of science, as if the unparalleled cuisine, culture, and cozy accommodations in our little Scott tents weren’t sufficient to lure us in to this grand adventure!

-posted by Morgan on the ice with (nano)diamonds. I am grateful.