Hi Everybody!  I’ve chosen today to do a first posting for the coming ANSMET field season because three of our field party members depart the civilized world for regions south within the hour (our mountaineers John Schutt and Brian Rougeux,   and Duck Mittlefehldt, who will join John on a pre-season recon trip).  I’ll be following them at the end of next week, and the rest of the crew leaves just after Thanksgiving. 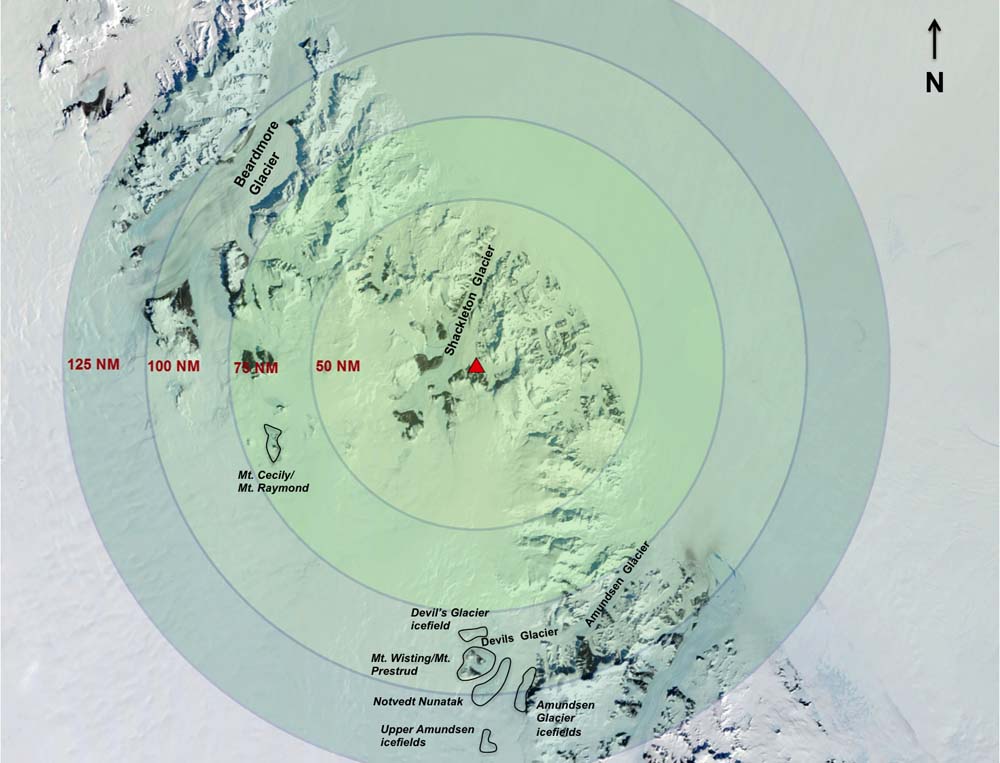 The bullseye marks Shackleton Glacier Camp, which will serve as a hub for us during the coming season. Two teams will operate from this hub- a “systematic” team working at the icefields around Mts. Cecily, Raymond and Emily west of Shackleton Camp, and a reconnaissance team exploring icefields in the Amundsen glacier region further south.

We have a complicated season ahead of us. Our field season begins with a two-person reconnaissance visit to the Elephant Moraine icefields. We were very active in the region up through the mid-90’s; but increasing local snow cover (associated with the giant iceberg B-15 blocking the escape of sea ice from the Ross Sea) led us to move on to more southerly targets rather than try to force recoveries. B-15 is now officially gone, local climate appears to be resetting, and so it’s a good time to re-evaluate dedicated searching at the site.

Following that trip, we’ll take two teams of four out to a new camp in the Shackleton Glacier region. This camp has been in planning for several years, became operational last year, and will provide logistical support for science throughout more southerly parts of the Transantarctic Mountains.   We’ll use this camp as a flight hub and staging ground for our two field parties, each of which will operate independently.   “Team Systematic”, led by Jim Karner, will conduct season-long systematic recoveries at the icefields around Mts. Cecily, Raymond and Emily. This is a beautiful site that was first explored in 1985, revisited about a decade later, and in spite of a few tries hasn’t been successfully visited since (it was a planned second target during seasons at nearby Larkman Nunatak). Team A will stay at these icefields for the entire season, and if weather allows may even finish our recovery efforts at this site (one of the homes of the GRO meteorites).

“Team Recon”, led by Ralph Harvey and John Schutt, will be dedicated to reconnaissance. The team’s targets are several interesting icefields in the headwaters region of the Amundsen Glacier, only one of which has been previously visited (Mts Wisting and Prestrud, where 26 meteorites were recovered in a few days in 1995). Team B will use a pre-deployment overflight to prioritize targets and establish landing sites, and then visit three of them over the course of about 5 weeks. The main goal for Team B is to get boots on the ground and fully evaluate the meteorite recovery potential of each site. Given that the Shackleton camp is likely to be active for several following seasons, our hope is that one or more of these sites will be found worthy of larger scale recovery efforts later on.

For the next few weeks you can expect updates about once a week;  once the full team is assembled we’ll start posting every day.  When we’re in the field I hope we’ll be able to post daily from both teams;  but let’s not get ahead of ourselves!