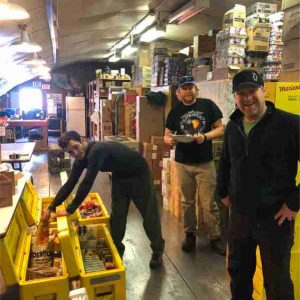 Scott, James, and Jim (from left to right) “shopping” and pulling and packing dried foods for the next 6 weeks.

The last day of our Shakedown was a beautiful day and after a breakfast (oatmeal, yuck!) we started our day at 8:30am with a science meeting followed by traverse training on skidoos and meteorite recovery training. We had a lot of fun and recovered a “snowballite” and a “pringlesite”. After that we broke camp. Packing up the tents, the boxes containing food and camping stoves, and the sleeping kits, tying everything down to a sled, and hauling it all back behind skidoos is hard work and once we were back in McMurdo we were quite exhausted (at least I was). And yes, peeing into a nalgene bottle is hard especially if you are a woman. The pee bottle is marked with a red “P” on its lid. The normal water bottle looks exactly the same just without the “P”. Turns out when you have to pee at 5am in the morning, braving the temperatures and trying to pee into a bottle for the first time ever, it is easy to mix up bottles in the excitement. I was so proud for not spilling anything until I realized that I had used my water bottle instead of my pee bottle. Now the BFC (the Berg Field Center, where we get our gear issued) has a newly made pee bottle and I got a new water bottle in exchange. Phew!

Today was freakin cold but luckily we had to work hard to pulled all our food that we need for the next 6 weeks in the field. That kept us warm for the most part. With our food lists in hand we went “shopping”, pulling and packing dry foods such as rice mixes, nuts and chocolate bars, oak meal (I’m really not looking forward to breakfast for the next 6 weeks) (editorial note:  that’s a Freudian slip if I ever saw one) and later pulling and packing our frozen foods such as meat, veggies and lots and lots of butter. We also loaded a lot of gear today and got it into the cargo system, which means we mostly hauled and moved things around, packed it on big pallets, weight it, and measured out its dimensions. This was really hard work and I can feel all my muscles already while I write this blog. But we made very good progress and some of our gear has already been flown out with LC-130s to Shackleton Glacier Camp, our last leg of the journey before we get deployed from there into the deep field. We will follow on LC-130s soon too (hopefully). After dinner we went for a walk to Discovery Point near McMurdo and saw Scott’s hut from the outside. It was built by Capt. Robert F. Scott on his Antarctic expedition in 1902. The hut is remarkably well persevered including a mummified seal that is over 100 years old. We hope that we get a tour of the inside soon.

James, Scott, Ioannis, and I finished the evening off with a game of Uno. Ioannis’ brilliant card hand swap drew tears to our eyes from laughing so hard (including Ioannis) and funny looks from the other McMurdo residents. Great evening with good friends. A wonderful way to end a hard-working day.