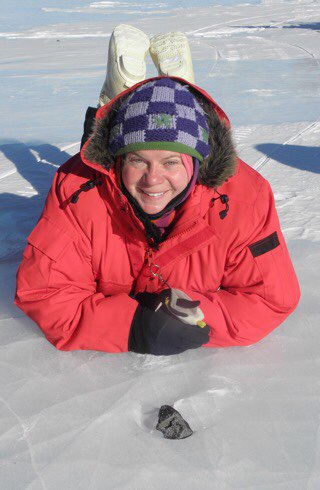 Barb and one of the achondrites. 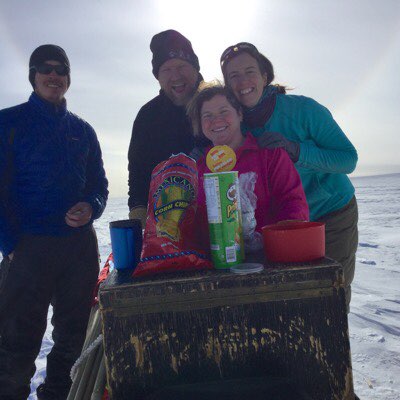 Brian, Jim, Barbara, and Juliane enjoying the sun with a chips and salsa party.

Today we finished systematically searching our beloved “Achrondrite Orchard” ice field. All meteorites possible were harvested and recovered. Our count is now up to 172 meteorites of which 11 are achondrites and 2 are iron meteorites. So awesome!!! For some of you the difference between chondrites and achondrites might not be so clear or our excitement over achondrites not well understandable. So here is an explanation: Once upon a time, on a far far away planet there was a peculiar race called humans. Early on in their history they marveled at the sky and started to wonder about the stars, the solar system, about their own planet called Earth, how it was formed and how old it was, how other planets like Mars formed, if they were different or similar to Earth, the age of the solar system, where they came from, etc. ….. Now, since we live on this very special planet Earth, you would think that some or even most of these questions could be answered by simply picking up rocks and analyzing them. But the big problem (if you are a planetary scientist) with our planets is that it is very active. In fact, it is a gigantic recycling machine. We have plate tectonics with subduction zones where old material gets recycled back into the interior and eventually melted, there is wind and weather that cause erosion, which breaks rocks apart, there is volcanism, and lots and lots of water that alter rocks. And so all the old geologic evidence that we could have used to answer these questions about Earth, its early history, and its evolution as a planet has been changed into something new. The old information is lost. So if we want to learn about these things we must find materials that haven’t changed much since their formation, we need to find rocks that can give us snap shots of different time period s throughout our solar system history, throughout planetary formation and evolution, rocks that can give us insights into all the different processes that occurred. And these rocks are meteorites. They are our space probes and since we can’t simply turn back the time or visit other planetary bodies (yet) such as Mars, they are our only means to help us understand and answer some of these questions. Meteorites can roughly be divided into chondrites and achondites (meaning non-chondrites). Chondrites are pre-planetary rocks, rocks that formed some 4.5 billion years ago directly from the proto-planetary disk of our Solar Nebula. They represent the first solid materials in our solar system. And because they were the first solid rocks formed in the solar system, they are the building blocks of planets. From those rocks we can learn about different physical and chemical processes that happened very early in our Solar System, we can learn about the different types of materials that were available during that time period, and learn about the Solar System formation, its evolution, its environment, and its age (4.568 billion years by age dating those rocks). Achondrites on the other hand are pieces of a differentiated planetary bodies, like the Moon or Mars. From those rocks we can learn about planetary formation, evolution, and differentiation, meaning how planets in general form, how all the different layers of a planetary body come to be (eg. the crust, mantle, and core). We can learn about the physiochemical processes of a specific layer, for example, if there was water present in a mantle, the specific isotopic composition of a layer, and then relate all that information back to our own planet Earth to see differences or similarities. Achondites are rare. Only a very few % of all meteorites are achondrites. They are so rare because they have to get blasted off a planetary body during an impact event in which they have to reach escape velocity, otherwise they just fall back to the planetary body from which they tried to escape in the first place. And that is why we get so excited every time we find an achondrite. They are special little snowflakes and we love finding them (but of course we love finding chondites too, in fact all and any meteorites are awesome to find). So today was another successful achondrite recovery day. In addition, we had barely any wind and so we could feel the warmth of the sun even though it was still -10C outside. And thus, after we came back to camp, refueled the skidoos, secured the meteorites, and did camp chores, we had chips and salsa outside. I even dared to attend without my “Big Red”, without my puffy down jacket, and without a hat. Granted I lasted exactly 4.5 minutes but hey that’s still pretty good. Overall we had a very wonderful day today and we hope you all are doing well too.