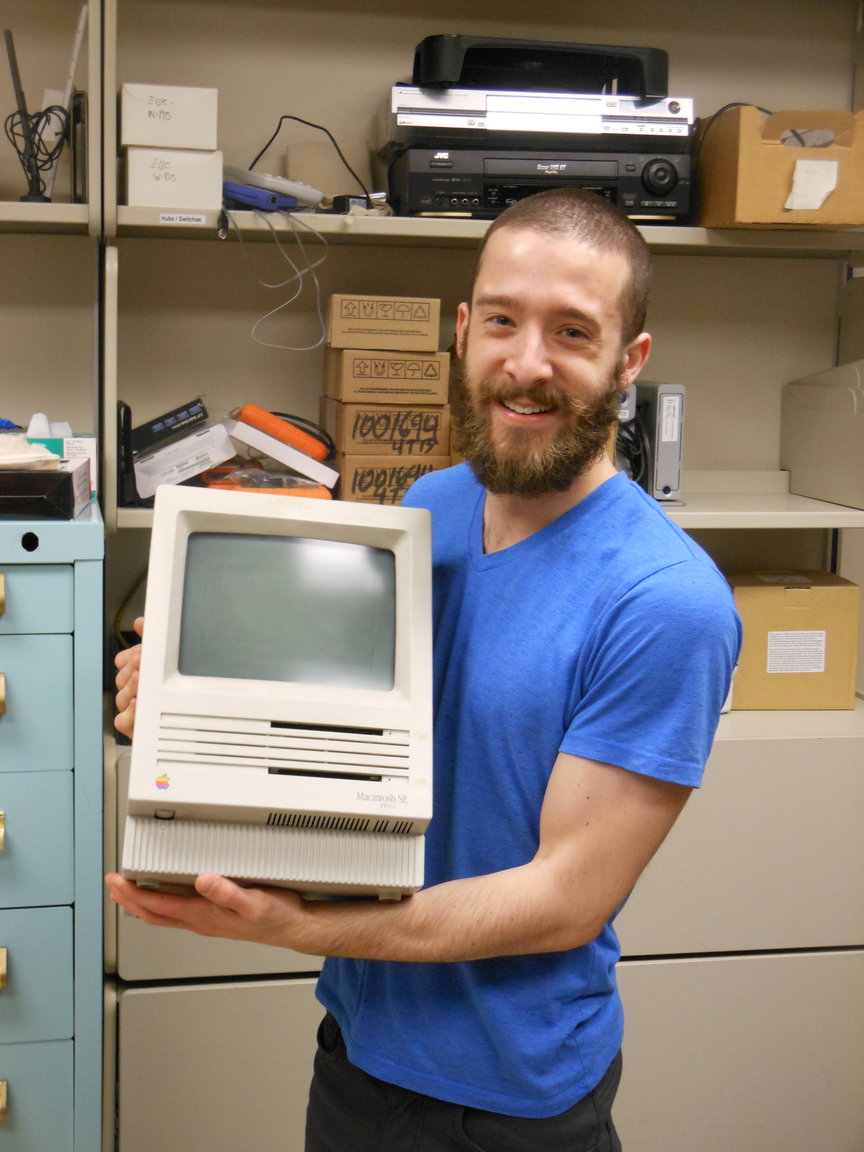 Zeke showing off some of the equipment in the room next to his office.

In a dimly lit room off in the corner of a building, the hum of servers in the background, code streams across the computer screen like a scene from The Matrix. At least that’s how Hollywood would portray it if Antarctica I.T. Support ever made its way onto the big screen. The truth however, as you likely would expect, is much more down to Earth (pun intended).

In this edition of “Behind the Scenes” we introduce Zeke Fenelon who works in I.T. here at McMurdo out of Crary Lab (science building). Zeke’s duties involve setting up and maintaining network and computer access which includes making sure scientists, like us at ANSMET, are able to access what they need (i.e to get blogs out while in McMurdo).

This is Zeke’s first season in McMurdo having arrived in mid-October. He’s due to head home to Seattle at the end of February after a two week vacation in New Zealand where he’ll meet family and go surfing. I personally challenge him to do both those things at the same time!

Zeke found out about employment in Antarctica through his cousin who worked in meteorology at South Pole Station. Like many people working behind the scenes supporting operations every step of the way, the opportunity to get away and experience somewhere new motivated Zeke to apply. While undecided if he’ll return in a future season, he enjoys the lack of phones, the people, and the general culture around McMurdo – describing it as the best part about being here.

Outside of I.T. work, Zeke creates digital compositions (music) for video games. In fact, he left post-secondary education to compose music. One of the fantastic aspects about being in Antarctica is hearing about how people got here and where their life has taken them – every story is different.

A few days ago in The Coffee House when the eight of us on ANSMET were going over our pre-season meteorite tally bet results (Brain edged John by a narrow margin for the victory), I bumped into Zeke who was playing Settlers of Catan with some friends. Having never played before but having heard a lot about it, he briefly explained the rules to me and offered up a game sometime. Sometime came two nights ago – it was tonnes of fun! Barb and Juliane had played before in the field with Jim and Brian; Ioannis and Brian chose to observe. Zeke, an expert at Settlers of Catan, Barb and Juliane, and me, as green behind the ears as they come, were all vying for land and resources on the island of Catan.

Zeke explained the rules well and provided me with a few important strategies. I felt ready. I felt prepared. I knew how to win! In the end, I came in last, defying beginners luck. A rematch is planned for the near future. If you’ve had your butt kicked once, what’s a second time!? Right, <Insert Under-Performing Sports Team Here> fans?!?

Note from editor:  I feel Scott’s pain.  I think it was the 2011 season when Settlers of Catan was THE game of the field season.  I think we played about 25 times and I only won once, on the last day in the field, when the rest of the team had pity on me and let me win.