Before and after photos of this year’s field team. 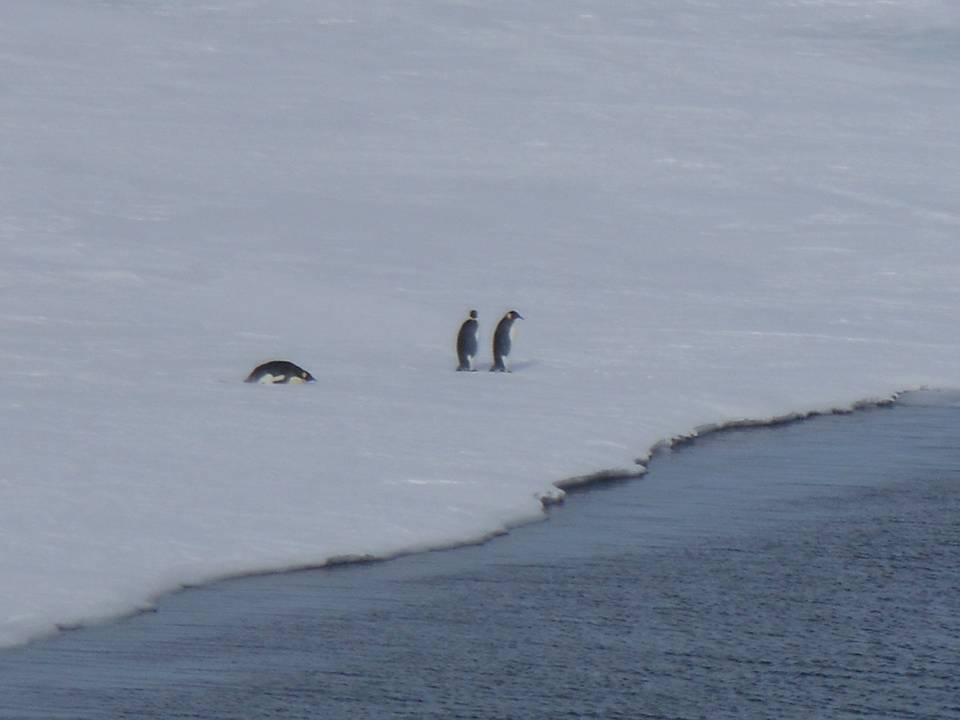 Three “penguins” at the ice edge between McMurdo and Scott Base.

To follow Juliane’s final post of the season, I wanted to take a moment to bid adieu as well. However, in part 1 of this tandem, she summarized everything perfectly. So, to quote John Scott on New Year’s, I’ll simply say: “Likewise”. Okay, perhaps that’s too short of a shortcut here. Besides, what would a blog post be without a few final cracks at James, our beloved chef and Chris Hemsworth doppelganger? <Tents and rolls fingers in an evil fashion.>

It really is difficult to summarize such an incredible experience. I’m not sure of the exact moment it hit me that I was in Antarctica, but the feeling that comes over you is truly remarkable. You find yourself immersed in a picturesque setting, devoid of all the noise of the modern world, and suddenly life becomes so much simpler and clear as to what is truly important. You can shed an apparent reliance on technology, the hustle and bustle of everyday life, and even lose the amenities we take for granted on a daily basis. But when you are in such a beautiful place, surrounded by the right people from various backgrounds and countries, it is a magical experience.

The cold and howling winds will make you feel alive in a split second. When the wind dies, and you’re blessed with pure, true, silence, a feeling comes over you that you simply do not want to let go of. The desolation, including the complete lack of Flora or fauna, does make you pause and think differently of of everyday life like the rustle of leaves on the trees or the buzz of the bees. And, on top of it all, we get to get up each morning and search for meteorites. With each find, there is the potential for ground breaking discoveries, for the benefit of all. It has been an amazing experience and I’m forever grateful to have had the opportunity to serve on a remarkable project I believe so strongly in.

Throughout the season we’ve tried to capture our day-to-day events and shed light on what life is like hunting meteorites in the Antarctic deep field. To conclude the blog here today, and follow that same theme, I offer before and after photos of everyone on the team in addition to a potential conspiracy on our hands. Oh the drama!

The “Before and After” feature is a rolling credits of sorts for this year’s 8-person field team. Feel free to picture some cheesy classic sitcom music playing in the background.

Buliane/Julara
Juliane and Barbara have been inseparable all season. It seems only fitting to present their before and after photos as a single pair. One thing you’ll notice, Juliane’s hair actually got shorter while in the field – thanks to hacking a large chunk off with a knife. Now that’s the Antarctic brave.

Jim
Jim seemed to be able to dodge the camera quite well this year. Though, I will say, he sported some really impressive face fur at the end of the season – he was nearly able to walk right by us on the reconnaissance team upon arrival back in Shackleton as we didn’t recognize him at first!

Brian
Upon arriving in Shackleton after the field season, we couldn’t tell if Brian had been shaving in the field or if the howling winds at the field site plucked his face near clean. Without photographic evidence, I’ve taken the liberty to attempt to recreate the approximate look using MS Paint. I leave most of it to your imagination.

Ioannis
This season I’m surprised Ioannis didn’t wear the shutter out on his camera he took so many photos. I propose we nickname him “Ice Mermaid” given the abundance of photo selfies he took using the timer on his camera in the laying-down-with-head-on-hand-propped-up-by-elbow “mermaid” pose. In fact, on a recent hike to the summit of Ob Hill, we noticed someone hiking in the distance. When they stopped, set something on a bag, and lay in front, we knew it was Ioannis. There’s photographic evidence to corroborate this.

John
As you can see in the photo, John’s appearance is constant and the definition of rugged, unflappable, and exactly what you’d expect an Antarctic legend to look like largely because he defines that images you have in your head of Antarctic explorers. The only difference you’ll see is a change in direction of his gracious flowing beard, depending on the direction the wind blows. It also doubles, as I alluded to before, as our dependable weather vane.

Some guy from… Canada?
There was a fourth in the reconnaissance team, didn’t feature too much in the blog photos luckily for you. Seems his hair grew a bit, likely put on some weight too given all the meals tenting with Chef James. Definitely the funniest looking one of the lot.

The one, the only, Chef…. Jaaaaaaaames!
The man who needs no introduction, the star of the Cooking with James episodes, the creator of those delightful dishes you all came to see and savour, James “I publish papers every darn” Day! He’s a man of many talents. His culinary skills are complemented by pitch-perfect singing that’d bring a tear to the eye of the Mona Lisa. Spice Girls? Elton John? The Beatles? No problem. Justin B… wait, he’s not British. Where’d he come from again? Right. Sorry about that! While many of us expect to come out of the field looking like we have just spent 5+ weeks in a tent with little means to take care of our appearance, James, aka the UK Chris Hemsworth, has superior skills that saw him leave the field looking better than he arrived, as you can clearly see.

Lastly, we’ll end with penguins. Why? Because everyone loves penguins. Also, because I think we may have a conspiracy on our hands. The other day, I was hiking, alone, around the Ob Hill Loop. There’s an opening in the sea ice where a large body of open water has formed between McMurdo and Scott Base. On the edge of the ice, one could see three emperor penguins – a peculiar sight given the distance of their usual habitat from the McMurdo Sound area. I pose the question to you… were these actually penguins? Or, were they John, Juliane, and Ioannis in disguise? Hear me out for a second here.

You know the saying that goes something to the effect of “your Dad could be Superman because you’ve never seen Superman and your Dad in the same room”? The next day we hiked to that same spot and the penguins were gone. Hard to be impersonating a penguin when you’re hiking, right? Also, Ioannis has heaps of gear and clothes. We’re talking a half dozen bags, and enough clothes he could go months without needing to wash anything (hence the La Sportiva nickname earlier). Is it not possible he brought several tuxedos with him? He had the space. Additionally, John, Ioannis, and Juliane are all approximately the same height. Now look again at the photo of the “penguins”. Lastly, and this is what solidified it for me, look at the position the “penguins” are in. The “penguin” closest is laying down. Who do we know that lays down frequently for photos? That’s right, Ioannis. The “penguin” in the middle is looking right at the camera. Who do we know that is always smiling right into the camera? Yup, Juliane. Lastly, the far “penguin” is ignoring the camera altogether. Who do we know from the field that is always business unless it is a posed photo? You guessed it, John.

Is it really so hard to believe I actually got a photo of Ioannis, Juliane, and John, wearing tuxedos on the seas ice doing one last search for meteorites near the closest thing to a blue coloured water they could find? I have alluded to the awesomeness of the team members here on ANSMET throughout the blogs, even questioning whether John was an alien in early January given his superhuman abilities. Emperor penguins far from home? Or well-dressed meteorite hunters searching the ice one last time? We’ll likely never know. I’ll leave it up to you to decide and debate.

Signing off for the final time in the 2017-2018 field season, we hope you enjoyed following the blogs this year and maybe learned something along the way. I for one cannot wait to come back, and want to thank once again everyone who supports and makes this incredibly important work possible. Warm wishes from a cold place,

PS. No sooner had I put my camera away the three penguins slid on their bellies and went into the water and haven’t been back since. Lucky I got a chance to see them, also lucky I don’t have evidence of that so the (fabricated) conspiracy lives on.