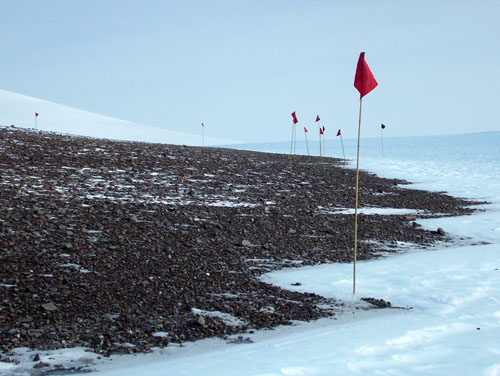 Flags marking finds in the moraine on the east side of the main Davis-Ward icefield, at the foot of Mt. Ward. (republished from January of 2015)

Hi everyone,  just got off the phone with Jim Karner who called me from the field.  It’s that time of the year where what’s happening next season can influence this season’s final priorities, and in my role as “fearless leader/ old fart back home” they wanted my opinion.  Or pretended to want my opinion.  Either way I’m grateful.

First the best news. Everyone is fine.  They got their resupply flight several days ago (Monday their time) so stress over dwindling fuel and chicken patty supplies has abated.  The main reason for infrequent posts lately is that they’re tired every night because they worked hard all day.  I can’t argue with that;  I’m happy to post for them if this is the reason.

Other “best” news:  They’ve got about 650 meteorites in the bag and another dozen or so marked- and even more spotted in an area of the moraine that they stumbled upon at quitting time and decided it was too rich in specimens to tackle immediately (as our vets know, sometimes you just have to stop searching or it will never end).  So Davis-Ward continues to be a great place for meteorite hunting, and they’re not done.  The big windstorm they had early in the season has played a role in all of this;  areas of blue ice and downwind firn edges that were ~50% covered with snow in previous seasons are nearly completely exposed this season and so the searches are going very very well.

Here’s the bad news that’s really “best problem to have” good news. John and Jim concur that ANSMET’s work at Davis-Ward will NOT be finished this season due to too many meteorites.  The “revigorated”  exposures along downwind firn edges and the high density of specimens discovered in newly searched areas suggest many more weeks of work,  not just the 6-8 working days left in this season (there’s about 11 days left, but weather and preparation for pull out are likely to use up several of those).  Jim and John decided that it might be a better use of the rest of the season to conduct detailed reconnaissance of the remaining unsearched areas  and conduct spot test-searches of areas that underperformed in previous year’s searching.  The goal would be to finish this season with the best possible estimate of how much work (how many person-days) is left at Davis-Ward.  They’ll still be recovering meteorites of course,  but this shift away from monolithic systematic searching will allow them to be flexible in the days approaching (and during) pull-out, since this reconnaissance can be done by small teams in separate areas on a day-by-day basis.   In a nutshell,  they know we have to go back there,  so let’s set up that future season for maximum success.  I’m 100% on board with that plan.

And yes,  this is par for the course.  Several years ago John and I compared notes on how early estimates of the time needed to “complete” an icefield compared to reality.  We were never done early,  and it almost always takes 3-4x as much time to finish searching an icefield than first predicted.  In some cases (Miller Range, I’m talking to you), it can take 10x longer.  Please don’t fault us for this;  being optimistic about the weather and the work is a pretty important qualification for ANSMET leadership.

So the news is good as we approach the last part of the field season.  The last thing I said to Jim was a reminder that it’s easy to get a little down and homesick as the season hits week 5 and 6;  and how important it was that the team stop and soak in the utter uniqueness of where they are and what they’re doing.  In just a few days they’ll be back in the civilized world, and their time  at the end of the world,  hunting for (and capturing) aliens, will become a memory instead of a reality.  Take the time to enjoy it before it ends.

-posted by Ralph from wintery Cleveland.