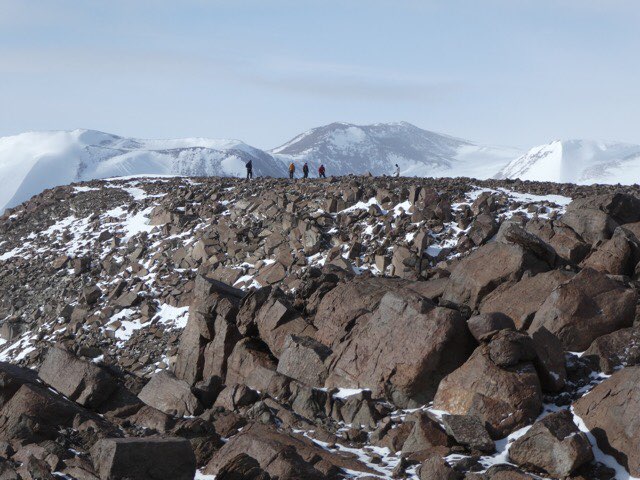 Old bedrock and boulders we explored; ANSMET team and Mount Ward in the background.

It has been snowing here in the Davis-Ward Nunataks area! Even just a light coating makes identifying meteorites against a background of thousands of terrestrial pebbles almost impossible. But this is Antarctica so the winds will pick up and blow the snow away. Until then we are busying ourselves with other tasks. This morning we took a quick excursion to a boulder covered ridge that stands well above the modern-day glacier level. This ridge is covered with glacial erratics, boulders that have been transported by a glacier from another area to their current resting place. Work done on similar surfaces using cosmic-ray-produced nuclides indicates these boulders were deposited millions of years ago. The boulders we were walking around on were put there when the ice was much thicker, perhaps several million years ago, and they have stayed there, relatively undisturbed ever since. There are only a handful of places on Earth where landscapes escape erosive processes that dramatically alter the landscape on timescales of even less than a million years. But in Antarctica we can walk around on glaciated landscapes that may have looked about the same for over a million years. That’s cool.

-Long note from RPH, who can’t help himself:

I love those rocks.  The field team is walking on one of the Davis Nunataks, composed of the Ferrar Dolerite, the signature cliff-forming rock of the Transantarctic Mountains.  The Ferrar is an intermediate-grained intrusive basalt, and while somewhat nondescript in the view above it can be gorgeous in thin section when fresh;  two pyroxenes (with colorful pigeonites often exsolving in herringbone-fashion) and two feldspars (mostly plagioclase but with a few  alkaline grains hiding in there). There’s a black, glassy mesostasis, and no shortage of accessories minerals; and because the Ferrar is generally Fe-rich it weathers to a very Mars-like red color.  In terms of major element chemistry it’s a tholeiite, with about 52% Si and signs of serious crustal contamination in the trace elements and isotopes. Mineralogically it can range from almost andesitic (with feldspar >> pyroxene and abundant silica in the mesostasis) to almost ultramafic (where pyroxene settled abundantly in thick hot sills to technically form a clinopyroxenite). Generally found as sills up to 200 m thick, it also grades into an extrusive equivalent (the Kirkpatrick basalt) which appears to have erupted pyroclastically and/or phreatically at many localities.

Uniform and durable, the Ferrar is exposed all the way across the Antarctic continent,  from Horn Bluff on the shorse of the Southern Ocean in North Victoria Land to the Theron Mountains in Dronning Maud Land. And it doesn’t stop there- equivalent rocks of the same age are exposed in Australia (the Tasman basalts) and South Africa (the Karoo basalts).  The equivalence of these rocks was considered an important argument for “continental drift” in Wegener’s early writings, and that hypothesis stood the test of time. Modern studies show these rocks spanning 5000 km across the globe were all erupted in a geological “instant” (182.6 ma, ±0.1, the early Jurassic) and correspond to the rifting and breakup of Gondwanaland.  I can’t explain that here and do it justice; whole careers have been spent exploring this important moment in our planet’s history.  But to put it crudely, when the Earth’s convecting mantle pushed several cratons together to form the Pangaea supercontinent (with Gondwanaland as a key part) it created a big, thick insulating blanket of crust; and when the heat built up after a while,  our planet decided to kick that blanket off like a kid with a fever. The resulting paroxym affected the planet in lots of ways beyond the locations of continents- it produced changes in the chemistry and circulation of the atmosphere and oceans which in turn led to major climate changes,  major extinctions and (ironically) increasing biodiversity.

What a moment- obviously I’m stricken by it, and there’s the ANSMET field team just blithely walking across it.  But I forgive them, because the ANSMET team has a bigger, truly first-order scientific target in sight; samples from space that explain the origins of the solar system and the geology of other planets.