ANSMET’s 2012-2013 field season has begun, and is going to be busy.   Two teams are on their way to McMurdo Station,  Antarctica as I write this and should arrive in the next few days.  Advanced personnel (two mountaineers and the science leader) are already in McMurdo and eagerly awaiting the rest of the teams. 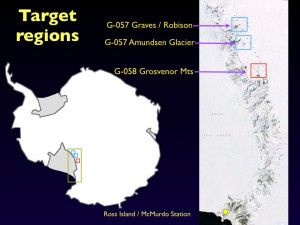 The two teams are going to different places and have different goals;  let me describe them both for you. One team is dedicated to systematic searches of icefields we’ve been to before, places where we know there are lots of meteorites to recover.   We call that the “systematic” search team (their formal designation within the US Antarctic Program (USAP) is G-058-M).  The systematic team will be heading to the Grosvenor Mountains region of the Transantarctic Mountains, about 650 km south of McMurdo Station (see theimage).  They’ll land on an open snowfield near the Otway Massif,  and then travel to icefields near Mt. Bumstead, the Larkman Nunataks, and around  Mts Cecily / Emily/ Raymond (the Grosvenor Mts proper).  If all goes well they’ll deploy to the region in the second week of December and return to McMurdo in the third week of January.   That team consists of…..

The other team is smaller and more mobile; we call them the “reconnaissance” team,  formally known as G-057-M.   Their goal is to explore icefields ANSMET has not visited before (or visited only briefly) and figure out their potential for larger-scale meteorite recoveries.   Like the systematic team, they expect to leave McMurdo in the 2nd week of December and return to McMurdo in the 3rd week of January.  The team will be moving around a lot during that season;  once a week or more (see the image) by light aircraft (Twin Otter for you airplane nerds).  During the first part of their season they’ll explore several icefields in the Graves Nunatak/ Robison Glacier region of the Transantarctic Mountains;  this is an area we’ve been to before and it has yielded many meteorite specimens.  But there are also lots of icefields in that region we’ve not visited,  so the full potential of the region is not yet known.  About half-way through the season the team will shift northwards along the Transantarctics to the Amundsen Glacier region. Here too they’ll explore a number of icefields whose setting suggests the potential for meteorite recoveries.   The reconnaissance team consists of:

As the next 8 weeks go by we’ll fill in the details through daily (or semi-daily) website updates.  I hope you enjoy the show!