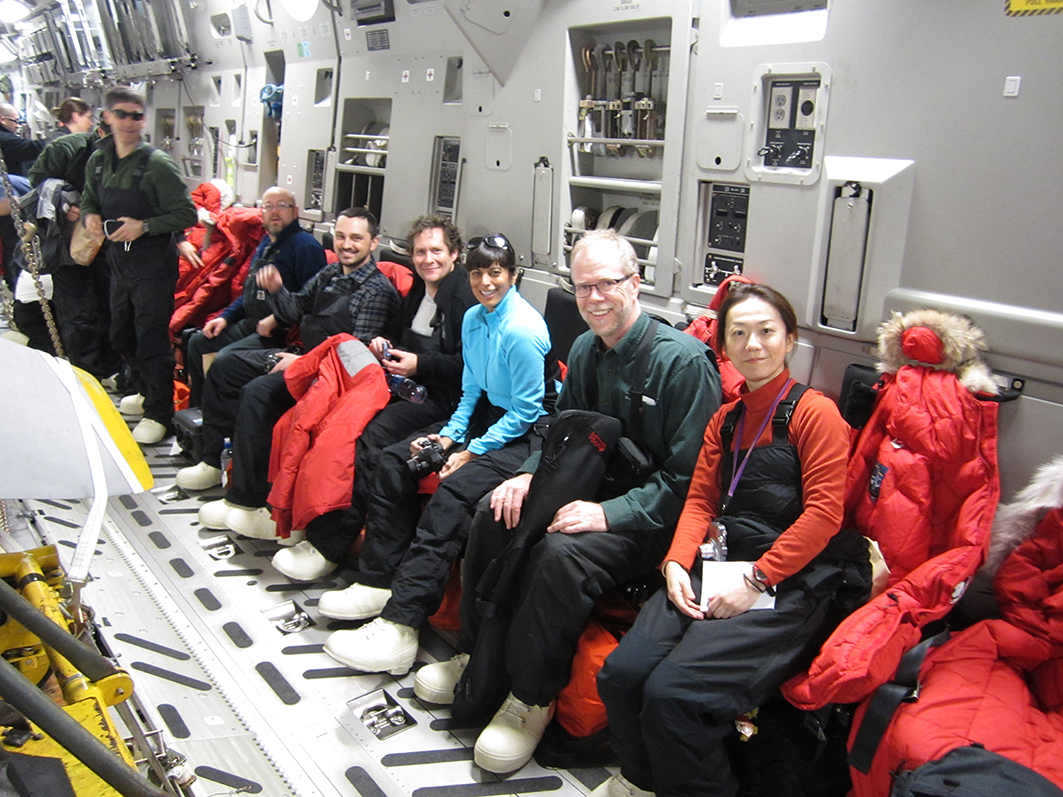 Aboard the C-17 from Christchurch to McMurdo

Hello! The 2012-2013 ANSMET meteorite hunting team is now assembled in McMurdo Station Antarctica. There are twelve of us from four countries ( USA, Canada, Japan and the UK), eight guys and four girls. Seven of us have been on ANSMET trips before, and five are newbies to the experience. Two of the team are expert mountain guides, one is a NASA astronaut, and the rest of us are planetary scientists and astrophysicists with diverse research interests from meteorites, to the Moon and Mars and asteroids.

We all flew around the world to meet up in Christchurch New Zealand where we were issued with all of our protective ice clothing kit, before travelling down to the ice as human cargo on a C-17 aircraft yesterday, on the 30th November 2012. We landed on an ice runway and were bussed to the US McMurdo Station, which is a bit akin to a mining village with cargo areas, living accommodation, fuel tanks, mess hall, bars and a large science research facility. There is a lot to see and do and explore the town. And it is flipping cold and the air is very dry here (no surprise there then as Antarctica is a dry desert!) – about minus 5°C in the daytime. There is no rain, which is a very welcome change for me coming from the UK (and from yesterday in a very wet Christchurch). The adventure is about to begin…

Ralph has already introduced the team, and you will hear from us all over the next couple of months as we blog from McMurdo and when we leave to start searching for meteorites in the Transantarctic mountains. This is my second time joining ANSMET – I took part last year – and I am just as excited to be back in this amazing continent again. Although this time I have an idea of what to expect being in Antarctica and being part of ANSMET, I am looking forward to all the new experiences that are ahead.

PS – hello to the rest of the 2011 ANSMET team (Ralph, Anne, Jesper, Christian, Jake and Tim) and other previous ANSMET vets.