John, Joe, Tomoko and I reached the Klein Glacier region of the Transantarctic Mountains yesterday (Friday). We took off at about 10 am from Pegasus air strip close to McMurdo on a LC-130 US air force plane, which is a Hercules equipped with skies. The aircraft was loaded with most of our kit that we would need to set up camp and we were the human cargo. After about an hour into the flight we flew over spectacular scenes of the mountain ranges – seeing huge glaciers with rocky moraine fields, wind-whipped peaks, giant crevasses ripping across the ground, and even a few blue ice fields to get us excited about the meteorite hunting ahead. After a couple of hours we touched down at Klein and went about setting up camp of two tall yellow Scott tents (pyramid shaped with four corner poles) for sleeping, organising our cargo and setting up the solar panels and small orange coloured poo tent. We waved the plane goodbye as it fired up its engines and used rocket jets to assist in take-off. Once airborne it flew back over camp and tipped its wing in farewell. We spent the rest of the day organising cargo and settled in for a first meal and sleep. We had another LC130 visit us at midday today to drop off the rest of the cargo (fuel tanks and our two remaining snowmobiles), and so we are fully equipped for the season ahead. The weather here is just stunning – no winds and blue skies – about minus 10 C outside. We are keeping our fingers crossed that it stays this way! The views are magnificent – to the south the open expanse of ice and the polar plateau. To the north the start of the Klein Glacier surrounded by nunataks (small mountain peaks poking through the ice) and what looks like sheer cliffs, and to the west we can see more mountains where we hope to go and start the meteorite hunt tomorrow (Sunday). 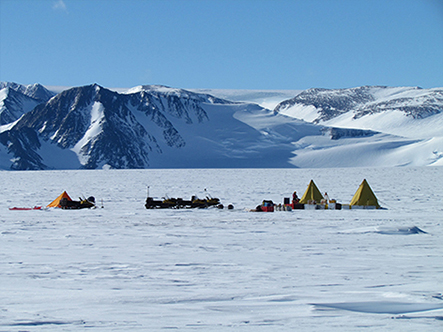