The photo shows a disassembled carburetor from the engine of one of our snowmobiles. Snowmobile carburetors constituted the main part of the day for Shaun and myself.

Ever since arriving on the polar plateau, our team has been plagued with snowmobile engine problems, mostly related to too much fuel in the fuel-air mixture. The result is that the machines hesitate when accelerating, or even die unexpectedly and refuse to restart. This is not a good situation. Without the snowmobiles, we would be limited to searching on foot, which would mean a search radius of only a couple of miles, versus ten or more miles with the snowmobiles. Without snowmobiles we would have no possibility of moving ourselves and our thousands of pounds of gear to other camp locations. Without snowmobiles it would be hard to get our team out of the field at the end of the season, since the big LC-130 cargo planes can’t land where we are.

Unreliable snowmobiles are a big problem, and one that had to be fixed before we leave for Larkman Nunatak, thirty miles away to the south and our next search destination. Shaun is our snowmobile expert, but he wanted a helper, and I had volunteered early in the season to learn how to fix the machines. So while the rest of the team went to the summit of Mt. Bumstead to sample the spectacular geology up there, Shaun and I stayed in camp and worked on snowmobiles. A few phone calls to the experts in the shop at Mac Town pinpointed the problem in the carburetors. One by one, we drove the snowmobiles to our shop: a Scott tent pinned only on one side, so we could open it like a clamshell, drive the machine inside, and let it down to make a sheltered place to do engine work. We opened hoods, pulled out air boxes, unscrewed carburetor caps, and extracted from each the slender steel pin that controls the flow of fuel to its cylinder. The pin is positioned by a tiny clip ring that needed to be moved precisely one notch away from the middle of the carburetor, a job for needlenose pliers and eyes perhaps a year or two younger than Shaun’s or mine. Nevertheless, we got the first machine’s two carburetors done in an hour, and by the end of the day we could convert a machine in about 15 minutes. Skill comes from practice. I missed some great geology and wonderful views today, but now I know how to adjust a snowmobile carburetor.

Testing the adjusted machines shows them to operate much better, so we think we’re all set for tomorrow’s long drive to Larkman, and many miles of meteorite searches for the rest of the season. 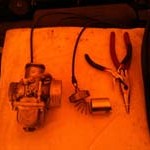