Blue skies have returned and today the recon team moved from our snowy home on the Klein Glacier surrounded by mountains to the bleakness of the Graves icefield. A Twin Otter aircraft arrived from the South Pole around 9 am this morning, and after 5 short roundtrips a mere 20 miles back and forth (which was also a huge 10 degrees longitude!) we were at our new destination on the edge of the blue icefields. We have set up our new camp much like the old one with John and Joe having the westerly tent, Tomoko and I having the easterly one, the poo tent downwind to the north, and our four snowmobiles in between. I am completely wiped out after carrying gear around, banging stake posts into the hard ice and unpacking all our gear again, and have no idea how the Twin Otter pilots do this every day moving people around in Antarctica!

We are now at more than 87 degrees south, so this is the closest to Pole I have ever been. We are in what feels like the middle of nowhere with blue and white ice horizons completely surrounding us – a slightly higher rise to the south with some cracked bumpy tops, and we can just about see the peaks of two sets of mountains to the east and north east when the cloud lifts. But that is it – without the small mountain tops we would be encompassed by the deep freeze. We can hear the ice cracking and groaning underneath us.

I haven’t been anywhere like this before with so few points of geographic reference, so it will be interesting to see how I gauge a sense of scale and direction over the next few days with just ice, the Sun and our small yellow tents to look at. This will be a new type of remote reality to adjust to.

Hopefully, after the move we will all sleep well tonight before starting work in the morning hitting the blue ice to start the search for more meteorites. As we are so far from mountains it will be likely that every rock we encounter will be a meteorite so our hopes are high we will be in for a successful few days before the next move (I can feel my back creaking at the thought already!).

PS. Ian – through some wondrous means I got your message! Thanks for the news and for going to the effort of getting in touch 🙂 Hope all is well. 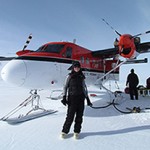 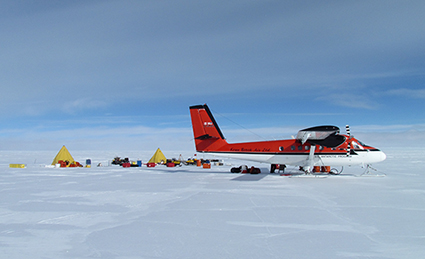