With -15 air temperature and 13-15 knot winds, today was a rather brisk day at Larkman Nunatak. We awoke to a marginal amount of snowdrift around our equipment, but not enough to hamper the start of the day. Our first order of business was to fill black plastic trash bags with snow. These snow-filled trash bags were used to mark the runway we created in the snow the previous day, which will be used by the twin otter aircraft to bring in our resupply and Christmas goodies in a few days. The chilly weather didn’t stop the 2012/2013 ANSMET systematic team from then going out and collecting meteorites. We collected 5 samples on blue ice and another 3 in a moraine, which are areas of concentrated sediment deposition at the end or side of glacial ice. At the end of the day we came home with some interesting meteorites that are unlike those we have seen so far this year. The team tentatively classified one sample, shown in the attached picture, as a carbonaceous chondrite. Carbonaceous chondrites belong to the same family as ordinary chondrites, the only type of meteorite collected until today and described in a previous blog. However, carbonaceous chondrites are unique in a few interesting ways, one of which provides clues about the formation of solid material in our Solar System. 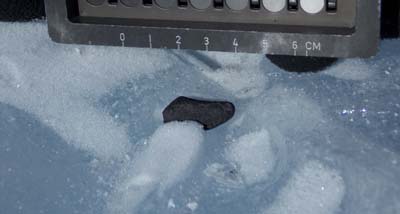