Today was the first day at Larkman Nunatak. Larkman is the peak of a large mountain poking its head above the thick layer of continental glacier that covers most of Antarctica. This is a very windy place. Any rough edges of the Nunatak have been smoothed over by the deposition of snow and ice. The blue ice here, forms a great crescent off the Nunatak with blue ridges of ice extending off two sides of the mountain with a large area of ice and rock in between. We are here to systematically search that ice for meteorites. The search is done by riding snowmobiles in a row across the ice. Each member of the team carefully searches their lane for rocks with the distinctive shapes and black fusion crusts of meteorites. The blue ice is not flat, but rather looks like a rough sea, frozen in place, with 10-cm scale ripples, meter-scale waves and huge swells. Riding snowmobiles across this ice is fun, but one must ride slowly and carefully. The blue ice is partially covered with hard drifted snow. This afternoon, we systematically searched a beautiful and rough patch of blue ice and snow at Larkman, riding slowly and carefully as we hunted for meteorites. This was a very successful search for the ANSMET Team. I found my first ever meteorite, an ordinary chondrite about 5 cm long and 4 cm wide. Others on the team found similar stones. However, the big find of the day was a very large meteorite that was visible from about 100 meters away. Stan, who was searching along the edge of the row, found this monster. It is about the size of a honeydew melon, and isn’t far the largest sample found this year. Meteorites are so important in planetary science because they provide the rock record from the formation of our solar system and the planets. The large meteorite found today will likely provide important clues to the early history of our solar system. 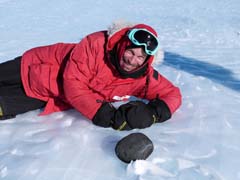 Stan with a big one