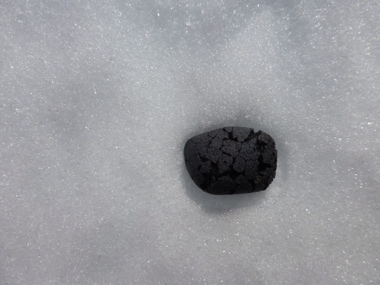 4.566 billion year old carbon, A small carbonaceous chondrite, about the size of your last thumb nuckle, with a characteristic “breadcrust” texture fusion crust.

Remember the Crosby, Stills and Nash song… “We are stardust, we are golden, we are billion year carbon….”? I find myself humming it a lot when I’m working late in the lab and I was singing it on the skidoo after we found several meteorites that looked like carbonaceous chondrites to some of the experts in our group. Carbonaceous chondrites often look like a chunk of charcoal in the field. If the interior is visible, it is almost as dark as the fusion crust (see picture. Remember, we are unable to say for sure what kind of meteorites we collect till they are classified by the folks at JSC but we usually try and make an educated guess while in the field). Barbara talked about chondrites earlier in the season and I just wanted to elaborate on my favourite kind of chondrites. Carbonaceous chondrites are chemically complex and heterogenous. They sometimes contain water-bearing minerals that are a sign of aqueous alteration occurring on the parent body. But unlike ordinary chondrites, they show very little signs of thermal alteration and show no signs of meteoritic metal. A very rare subgroup of carbonaceous chondrites, CI chondrites, are the most primitive meteorites and have a chemical composition very similar to that of our Sun. While all the starter materials for our solar system are dust from stars in the galactic neighbourhood, all this material has been mostly homogenized and is now unrecognizable as what it originally was – stardust. However, the least altered carbonaceous chondrites contain bonafide pieces of stars that escaped alteration, and we are now able to recognize and study these grains in our laboratories! These grains are called presolar grains because they formed before the solar system did. Presolar grains come in different varieties: silicon carbide, graphite, metals, nitrides, silicates, oxides, etc. and vary in size from 10s of microns to a few nanometers. We can identify them based on their completely anomalous isotopic compositions (isotopes are the same element with a different number of neutrons, e.g., 12C, 13C, and 14C are all isotopes of Carbon) compared to anything else in the solar system. These are compositions that can only be attained in natural nuclear reactors – stars. Some presolar grain varieties can be as rare as a few parts per billion of the meteorite! With high-end instrumentation, it is possible to scan the matrices of meteorites to identify some of these presolar grains in-situ, but some varieties need us to completely dissolve a piece of meteorite in acid to recover stardust – a method commonly called “burning the haystack to find the needle”. After the grains are identified, we set about trying to find their origins. The most common origin of presolar grains is Asymptotic Giant Branch (AGB) stars that produce most of the dust in the interstellar medium. This is the kind of star our Sun will evolve into at the end of its lifetime in another 5 billion years or so. We can also trace presolar grains back to massive supernova explosions where most of the heavy elements in our solar system come from. Thus, the study of presolar grains or stardust allows us to trace the origins of our solar system. It’s a truly humbling experience for me to stare at a meteorite we find in the field that might contain this stardust and wonder what new clues it might hold to our origins …

A field update: Some of us were supposed to get pulled out of the field this morning but high winds in McMurdo prevented the Basler from coming out to get us. We are now backup to a flight tomorrow. I have to say that I’m not the least bit disappointed because 2.5 weeks in the field (for us newbies) just doesn’t seem enough… I’m happy to stay as long as possible. The winds have died down and it’s just gorgeous over here. I guess it will get a little boring if we get stuck here longer because we have stopped hunting for meteorites (not much fuel left) and are pretty much camp-bound. If all goes well we should all be in Mactown by the end of the week. Stay tuned for more updates.

-posted by Manavi (edited by rph)