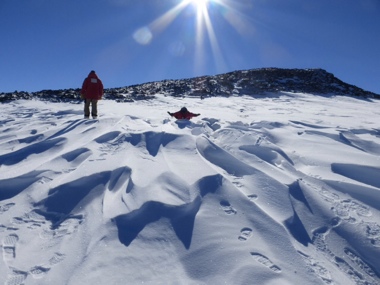 Barb and Jim playing on the Sastrugi Slide

This part of the Antarctic plateau is famous for crazy weather. While the typical katabatic (cold, dense) winds from the south blow here frequently, there are also many warm, calm days as well as clouds and sometimes snow. Any Miller Range veteran can tell you about a snowy day, or two, or three during their season. This means that the blue ice is often covered in snow, which makes finding meteorites a real challenge. On the plus side, because there is snow and wind, the landscape is covered in beautiful wind sculptures, and my favorite of these – dunes. We typically think of dunes as being made of quartz sand, derived from beaches or found in broad desert basins. However, because the only requirements for dunes are wind, sand (of any kind) and a place for them to form, we can find dunes of basalt, on Hawaiian volcanoes, gypsum, in White Sands and in the sand sea of Tunisia, and even snow. The properties of snow enable it to be changed by wind and sun and then welded together into particles large enough to be rolled or carried a short ways by the wind, forming ripples and then dunes. If you’ve been skiing or on a snowy plain maybe you’ve noticed these forms. 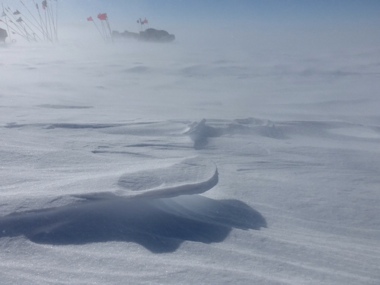 Elvish Footprints- High winds cause blowing snow, the formation of ripples, and the elevation of footprints (our favorite things around camp!).

Antarctic conditions, with especially cold temperatures and high winds, cause snows to be manipulated into fantastical forms. After a new snow fall, winds will carry snows and deposit them into simple dunes, in the Miller Range most commonly barchan dunes (students, which way do the horns point? What kind of “sand” availability leads to barchans?). Wind and sun will quickly sinter the snow together, hardening the dunes and ripples. Continued winds will then begin to erode the dune, though because the dune is already welded together, the erosion is piecemeal, and the dune clings to the surface as long as it can. The erosional forms, called sastrugi (a Russian word, as Alex informed us) are ridges elongated in the direction of the wind, undulating and overhanging in lovely wavelike structures. The erosion of sastrugi then leads to the availability of more snow to make ripples and dunes, and the process continues. We saw the formation and alteration of many dunes, ripples and sastrugi because of changing weather, and especially new snowfall, at the Miller Range this season. 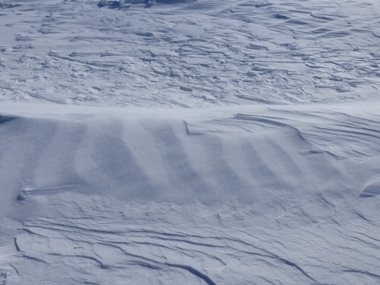 the wind giveth and the wind taketh away. the softer band of ripples in the middle is being deposited, while surrounding older snow is being eroded away. Ripples are about 4 inches apart.

I have been keeping a careful eye on these forms because of what they can tell us about other dunes in a remote desert in the solar system – on Saturn’s moon Titan. Giant dunes encircle the moon, and reveal properties of the winds and surface, as we observe them with the Cassini spacecraft. Like snow in the Miller Range, the sands of Titan are not typical of dunes on Earth. They are made of complex hydrocarbons, created high in the atmosphere from the breakup of methane, and then deposited on the surface, eroded, and ultimately blown into dunes. We are not sure of all of the properties of these sands, and while most forms result from the blowing of loose sand, some forms may have been sintered together much like the snow sands outside my tent door.

I feel lucky to be in this unique desert environment because of how it has helped me understand similarly alien and forbidding landscapes on other bodies in the solar system.

A field update: We are holed up again today, as the Kenn Borek Basler aircraft is supporting the withdrawal of the WISSARD field group, on the other side of the Ross Ice Shelf. We are on as primary for tomorrow, so cross your fingers. Meanwhile, because winds are fairly high, we’re enjoying catching up on writing, reading and some inward contemplation. We all think we’d be better off if we could keep this up in the real world.

-editorial note from rph:  My senior prom had the most depressing theme song ever: “Dust in the Wind” by Kansas.  The appropriate lines?