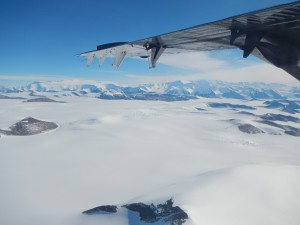 Hello again the world!! Christine and I made it to McMurdo. It sounds like nothing, but it has been a real challenge. Just back a bit in time, the initial planning was to have 3 DC3-Bassler flights directly to McMurdo. Then, yesterday, the planning was having John, Brian, Shannon and Devon spending one night in CTAM (the intermediary camp) while the rest of us would follow on Tuesday, and be back in McMurdo either Tuesdayevening or Wednesday, all using smaller Twin Otter planes, i.e 9 flights in total. However, dealing with planes in Antarctica is quite complicated. You have to manage weather, emergencies, mechanical problems, emergencies again, and unexpected problems. So, this morning, the last plan was to have John and Brian first to CTAM for the night, and then Christine and I to McMurdo via CTAM. Late morning, the weather turned a bit bad, cloudy and snowy, and suddenly, the plan was to have only Christine and I to McMurdo. The little problem was that we did not expect to leave before the afternoon. We just needed one extra hour to finish packing everything, plus a bit of time to undo the tent, and we had exactly 20 minutes for everything because the plane was there. Everybody helped us to pull out our tent and the rest of our gears, and I can tell you this is a bit scary to have the tent almost falling on you while you are still struggling to close a bag with an oversize sleeping bag in it! Thanks to the team, we managed it quickly and efficiently. The flight was beautiful, until we approached McMurdo where it was quite foggy. Actually, when we landed, it was heavily snowing, with big snow flakes. We discussed a bit with the pilots, who were as surprised as us. Apparently, the weather just changed 15 minutes before our arrival. Now, we are crossing our fingers for our dear colleagues still at Davis Ward, hoping that the weather will not delay their arrival in McMurdo. Of course we feel a bit guilty being already in modern comfort, but a good and long shower (the first of the year!!) should help us coping with the idea! Being in McMurdo is strange. So many people around us, we were not used anymore. Right now, the priority is shower and sleep. Tomorrow, we will start cleaning our stuffs, and harassing the flight team to be sure the rest of the team will arrive as soon as possible!

NOTE added by RPH;  in an email late last night from the fixed wing coordinator, she suggested that  ” ….this job would be good training for the sideshow act in which multiple plates are set spinning.”   Of course the only thing we want spinning is propellers,  but definitely this pull-out is going to be a challenge.  Here’s hoping for three twin otters in the air today!