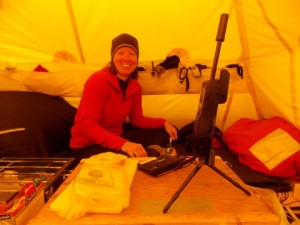 Shannon with the phone and WiFi connector (both black, on the right).  Breakfast fixings — bagel with Swiss chesse — and our stove are to the left. 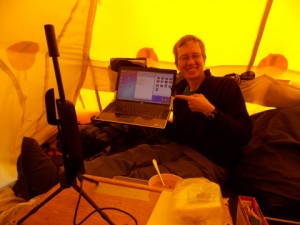 Devon with the laptop (phone in the left foreground).  Below the laptop is the spoon in a bowl of yummy blueberries-and-grits breakfast cereal.

Yesterday went according to plan. . . for the most part.  The beautiful weather at 7am had degenerated by late morning, when the Twin Otter aircraft was due to arrive, to completely overcast conditions.  But we had put out duffel bags to mark the landing strip, and the pilots were able to find a hole in the cloud cover.  So after making a couple of passes to inspect the landing strip, they came in for a landing.

Because of the weather, we only got this one flight, instead of the two that were originally planned, and Christine and Vinciane went out first.  Before dinner time, they had let us know via text that they’d made it back to McMurdo (and have likely already blogged about their trip from there!)   The rest of us are supposed to get out on 3 Twin Otter flight today.  The plan is for our mountaineers, Johnny and Brian, to go to CTAM, where they’ll camp one night and inventory / stash some gear and extra fuel until next season.  Shannon and I with our gear and then Jim and Ryan with their gear — and all importantly, with the meteorites! — will take the other two Twin Otter flights back to McMurdo.

For our last blog from the field (at least, if all goes according to plan. . .!), we thought we’d show you our field blogging set up.  We have an satellite phone with a WiFi connector, and an associated software program on a laptop from which to send the emails.  So we compose the emails or cut-and-paste them from our teammates into the software program, turn on the phone with the WiFi connector, wait while the phone connects to a satellite, and send!  Sometimes it takes a few trys, but we’ve learned to accommodate the finicky nature of the system, while getting the equipment set up within the cozy living accommodations, and even eating a meal at the same time!

We’ve loved sharing our team and adventure with everyone and we hope you’ve enjoyed it, also!  More blogs will follow from McMurdo (or from Dais-Ward, if we’re still here tomorrow. . .!)

-NOTE from rph,  I just heard from McMurdo that all three aircraft are on their way to Davis Ward,  AND as a bonus the Basler is heading from South Pole Station to CTAM where it’ll drop off fuel, and then head out to Davis Ward and grab a heap of cargo if possible!      I sure hope someone gets a picture of 4 aircraft all at Davis Ward all at once……….