Let me first update Ralph’s Jan 20 update – John and Brian made it back to McMurdo from CTAM.  They were there ~24 hours longer than planned, due to weather, but no doubt the gear that’s being left there until next season is now highly organized!  They even headed back out the next day to try to pick up some of that gear, but didn’t get to land due to weather.  They did get all the way back to Davis-Ward the following day to pick up the two skidoos we’d left there.  So now almost everything is at CTAM or McMurdo, although we did leave some fuel drums at Davis-Ward, for a likely return there in ~4 years.
Going back in time several days to Jan 20 . . . . As indicated in previous blogs, we were supposed to get 3 Twin Otters, and 2 visits per Twin Otter, to get us out of Davis-Ward, and we did!  It was a terrific day with great weather and lots of activity, both on the ground (breaking down camp, loading the planes) and in the air.  The three Twin Otters arrived is fairly quick succession and a Basler even circled during this time to check out our landing strip.  So it was the Davis-Ward impromptu air show, just for us!  Multiple planes in the air was terrific, but they were easier to photograph on the ground. . . .
Caption 1: two of the Twin Otters at Davis-Ward, loaded and ready to transport gear to CTAM. 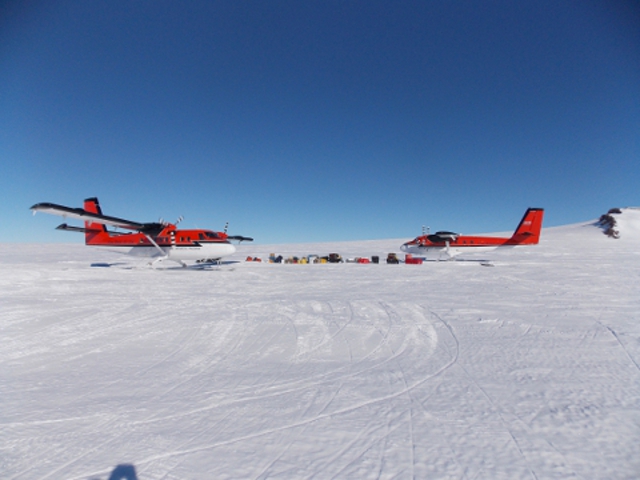 Johnny and Brian had already been ferried to CTAM, where they were helping upload and organize gear.
Shannon and I were the next ones out and got back to McMurdo just in time to catch dinner in the galley.  Jim and Ryan were ‘sweep’, making it back to McMurdo by ~8pm.
Caption 2:  Shannon and our gear on our Twin Otter flight to McMurdo. 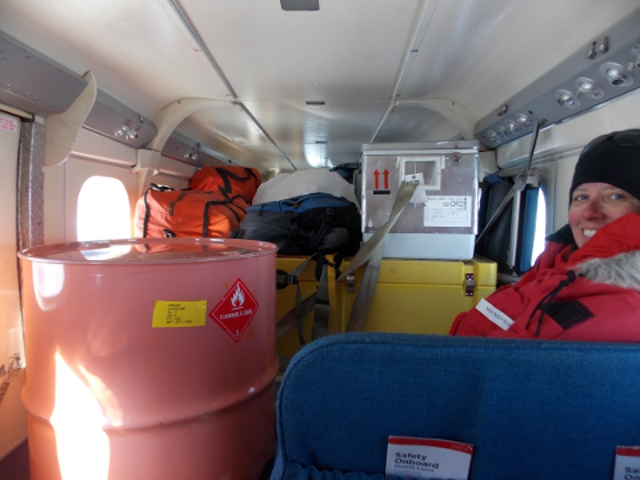 In the past few days here in McMurdo, we’ve been cleaning and turning in gear, and enjoying the various activities that happen in McMurdo at this time of the season.  For example, the Nathaniel B Palmer science vessel was in port and giving tours, which was fun, as is the USCGC Polar Star.  The cutter is still here to keep the path open the cargo ship (due to arrive tomorrow) and the fuel ship (due to arrive Feb 4).  So McMurdo activity will be very focused for the next few days on off-loading and then on-loading the cargo ship.  For most of our ANSMET team, however, we’ll be leaving town at 6:15am for transport to our flight bound for Christchurch.
-posted by Devon, McMurdo, Jan 25
Previous
Next
Scroll To Top