Contrary to the last sentence of yesterday’s blog, we didn’t make it out this morning after all.  The original manifest of ~50 people had shrunk to 7 when we showed up at 6:15am for transport to the airfield, and those 7 did not include any of us.  So a bit of disappointment, frustration (only 7 out of 50?!), and tedium (the old pre-departure drill of cleaning one’s room, stripping the beds, breakfast at 5:30am, hauling gear and self to the check-in building. . . ).   There’s another northbound flight on the McMurdo Intranet for tomorrow (Tuesday, Jan 27) although with no ETD yet listed.  We’ll check the boards when we go to dinner to see if we’re listed on the manifest.

In the meantime, the cargo ship arrived today.  This is a big event as it entails a lot of people to unload the food (freshies?!), gear, and other cargo for much of the next 8 months, and then to load it up again with garbage, science gear (like our meteorites!), etc., that’s going back to the States.  The arrival of the cargo ship to the ice pier is a very slow-motion exercise, at least from a non-participant perspective.  The USCGC Polar Star met the ship at the ice edge ~mid-morning and escorted it down the channel it (the cutter) had made in the sea ice.  The cutter then came pier-side to ensure the ice was (still) broken up.  Then the cargo ship docked, in a series of veeerrryy slow and careful, back-and-forth, maneuvers.

Caption 1:  The USCGC Polar Star (left) has broken up the ice all the way to the ice pier (off the image to the right) and now the cargo ship is on its way in, following the channel of open water and broken ice.

Caption 2:  The desired end result – the cargo ship tied up next to the ice-pier (to the right of the ship, or on its port side).  Although composed mainly of ice, the pier has a covering of dirt to protect it from the sun.  (The dark material in the foreground is the road I’m standing on, not part of the ice-pier.) 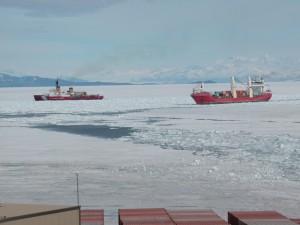 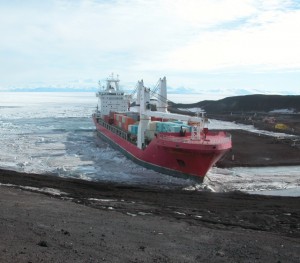