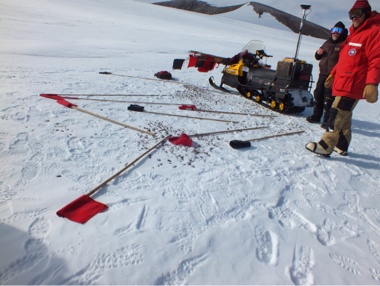 a pebble pond with flags pointing to meteorites ot clusters of meteorites (with John and Jim looking on).

Yeah….ANSMET 15-16 got its groove on. After yesterday’s foggy and snowy tent day, this morning was sunny and warm (9 degrees F) and calm. We set off to the north for about 12 miles to an ice field that was…….covered in snow. We remained ever persistent and began our sweep where the previous years ended (2009 initial foot search and 2011 sweeps terminated due to snow). The sweep began slowly with lots of dismounting and dusting off rocks with other rocks, gathered in the moraine for this purpose, only to remount again with no quarry. Then, two were found simultaneously. Finally, a promising search location. Not much later a frenzy started as meteorites were spotted in nearly every pebble puddle (or wind row) which stretched over the large central portion of the snowy ice sheet we were searching. The final tally: 43 samples. And the good news, we only finished one and a half sweeps with a majority of the pebble puddles waiting for the next fair weather day and some serious foot searching.